The Forum in collaboration with the Nepal Bar Association held a Citizen’s Forum on Federal Judicial Systems and Constitutional Dynamics.

This meeting brought together some of the most senior legal professionals in Nepal to discuss important questions related to Nepal’s recently promulgated federal constitution. Sunil Kumar Pokhrel, Secretary General of the Nepal Bar Association opened the Citizen’s Forum with Forum of Federations Director, Phillip Gonzalez. 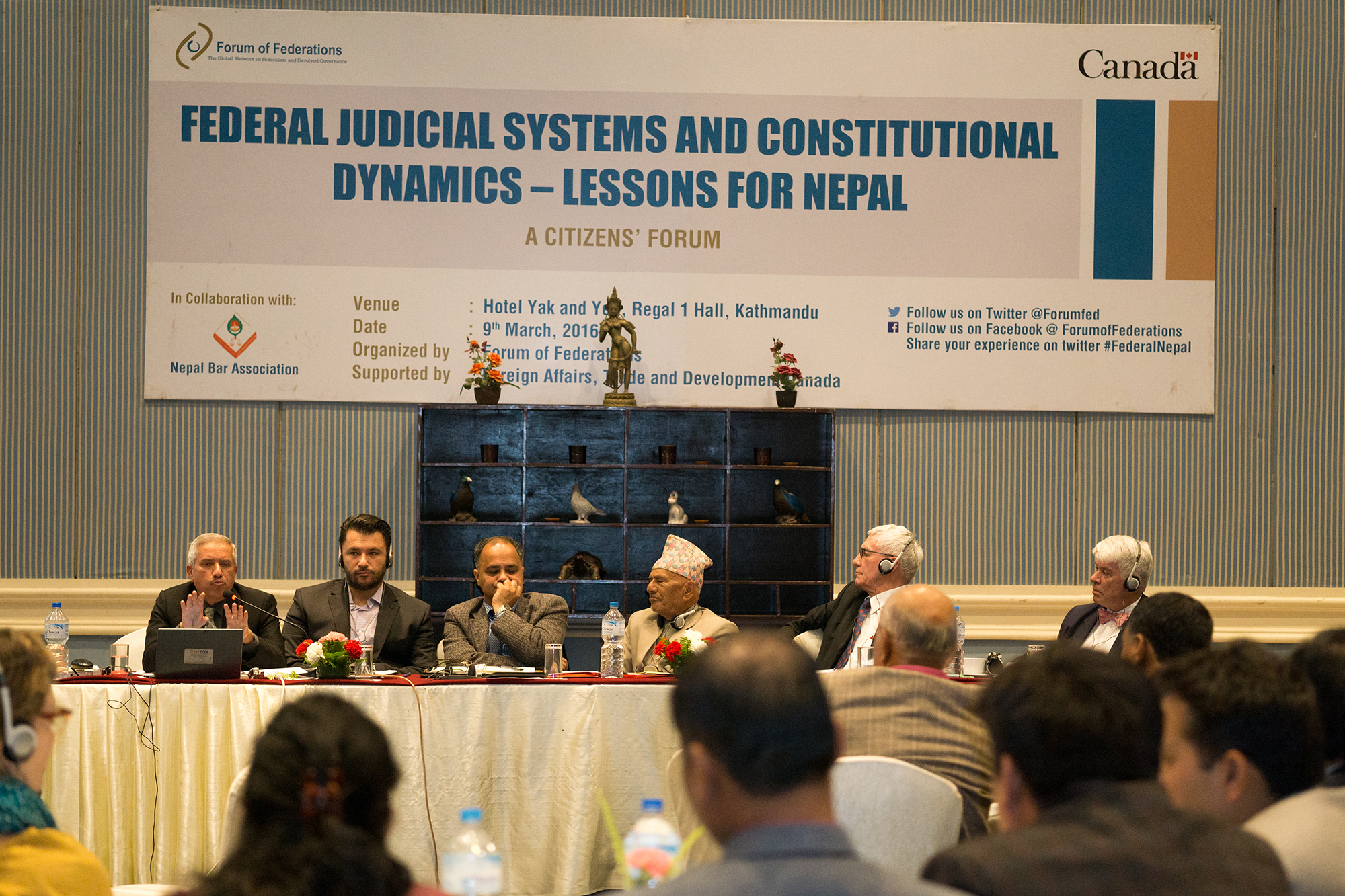 Surya Dhungel presented an overview of the constitution and those key constitutional sections and issues of importance to the central issue of implementing Nepal’s federal system of government.

Thomas Pfisterer, a former judge of the Swiss Federal Supreme Court and Governor of the Canton or Aargau and member of the Swiss Senate and Roger Wilkins, the former Secretary of the Australian Attorney General’s department provided overviews of salient features from each of their nations. Each then presented a comparative analysis of important issues for Nepal to consider on the vital question of implementing the constitution of Nepal. 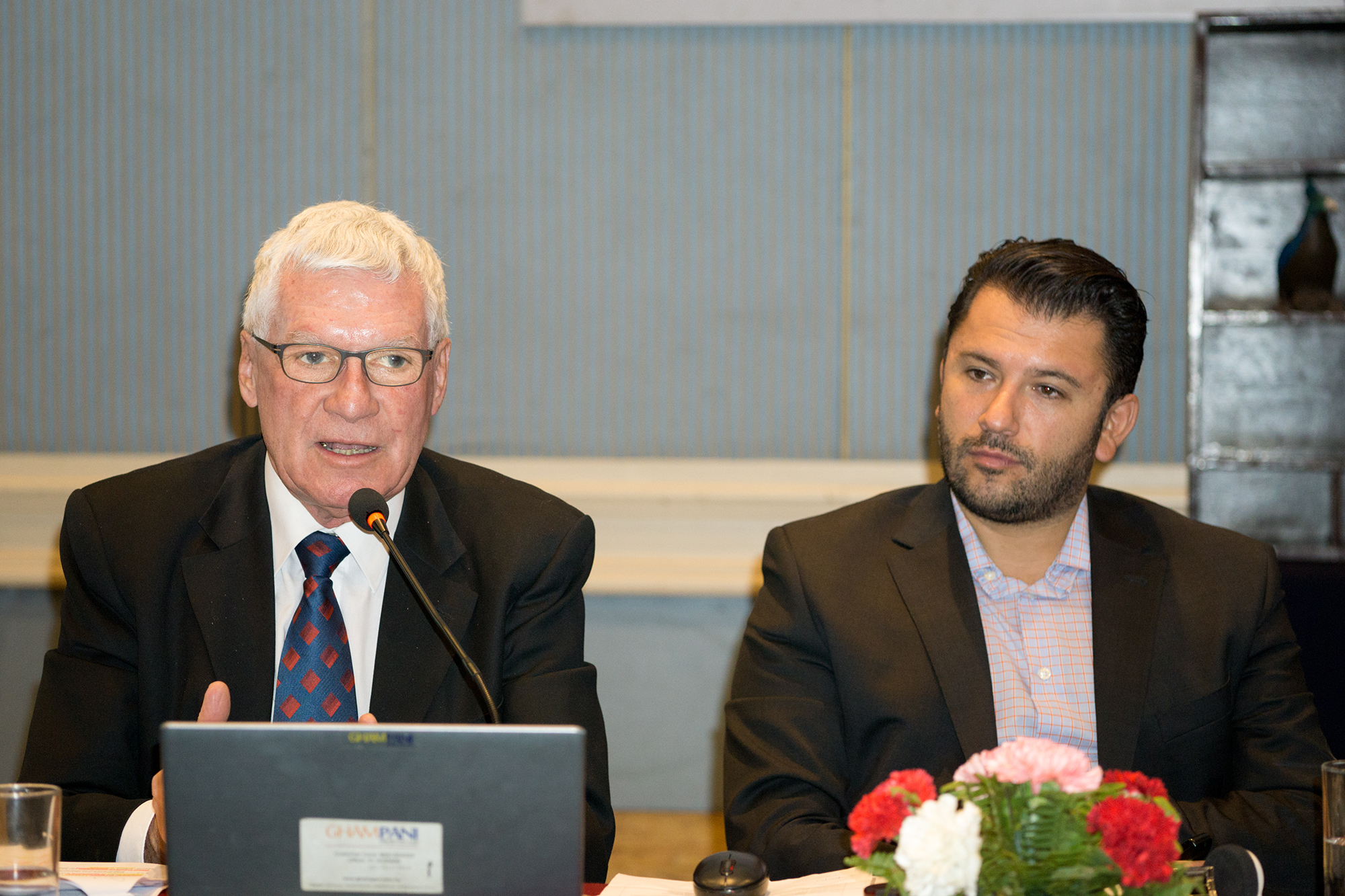 Thomas Pfisterer indicated that one of the key issues of judicial process and a function of the Supreme Court was its ability to safeguard democracy. The Supreme Court and judicial process offered an important option to act as an independent constitutional arbiter. He commented that this branch of government was a crucial line between (unavoidable) politics and (distant) law.

Roger Wilkins intimated that one of the most important issues for any democracy was the observance and enforcement of judicial compliance and access to justice for its citizens; if these were not evident a democratic system would fail under illegitimacy. He mentioned that though Nepal’s Constitution was a demanding document, the crucial work had been completed in the assignment of responsibility and rights for governments, opening the way for the hard task of implementation. 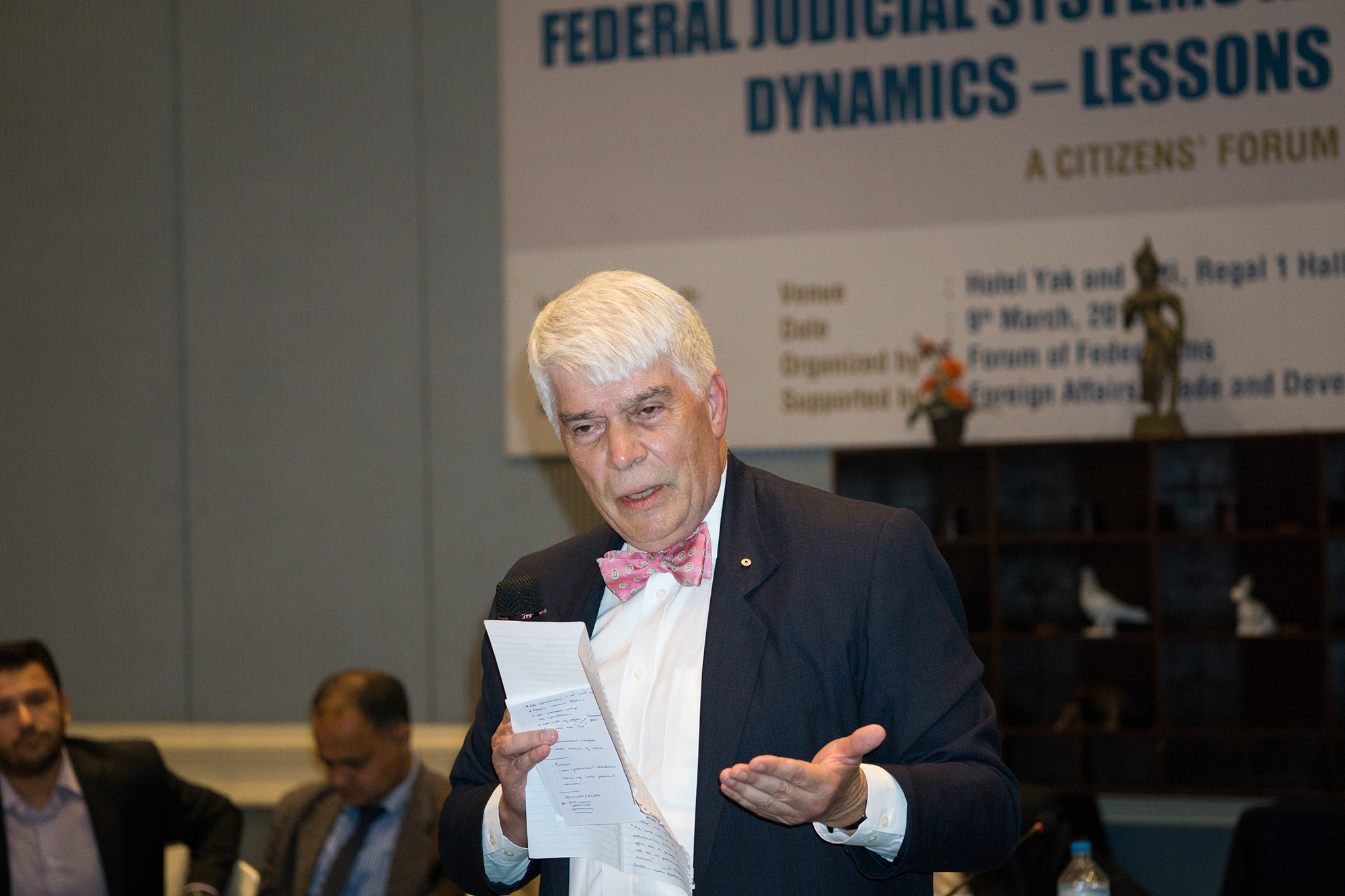 This lay the foundation for very engaged and interactive group discussions. Questions regarding the division of power, composition of courts, appointment to courts and the sequencing of constitutional and judicial powers amongst many were raised with all experts. The use of informal ‘mechanisms’ for resolving disputes was also raised and their ability to deal with issues, for instance, through the appointment of an ombudsman who could resolve judiciable and non-judiciable disputes. The Bar association was also signalled as playing an important role in many federal systems for its ability to protect the rights of the judiciary.

The program was fortunate to have the participation of elder statesman within Nepal’s legal and political community fraternity, Krishna Prasad Bhattarai who concluded the Citizens Forum.
The question of judicial power in this context is of monumental importance to Nepal’s democratic transition. The Forum of Federations was honoured to facilitate this discussion in collaboration with the Nepal Bar Association and other such platforms of discussion and learning as part of the project supported by the Government of Canada, Consolidating Democratic Transition in Nepal.