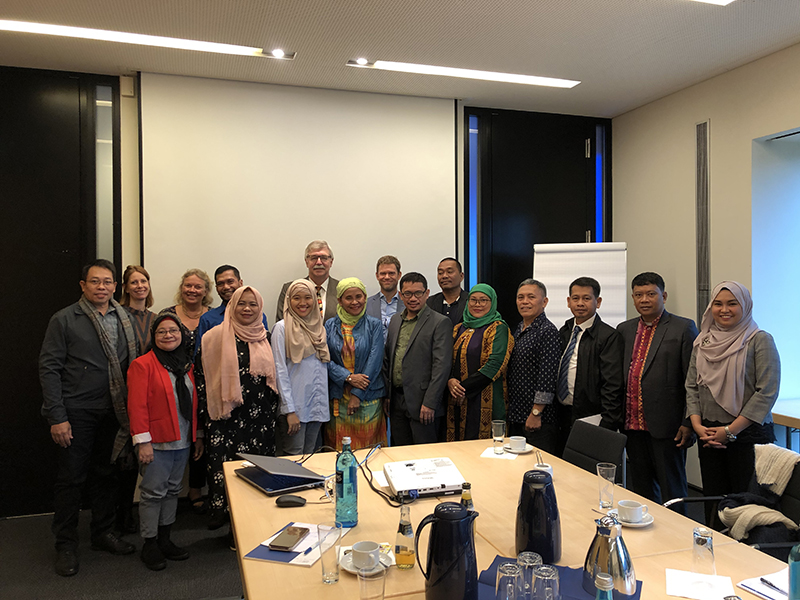 In the framework of a study tour coordinated and organized by the Konrad-Adenauer-Stiftung https://www.kas.de/home, Forum Vice President Felix Knuepling met a delegation from Mindanao in Berlin to discuss issues around German federalism and potential lessons for the Philippines. In January 2019, the region of Bangsamoro on the Philippines adopted the Bangsamoro Organic Law (BOL), therein establishing the autonomous political entity known as the Bangsamoro Autonomous Region. Ever since then, the Bangsamoro region is in the process of setting up a regional government. As the first official elections will take place in 2022, the regional authorities face a three year transition period in which governmental structures need to be established.

Specifically, the study program for the delegation from the Philippines aims at providing firsthand knowledge on the German federal system and the interactions of national and regional legislators with civil society. In his presentation, Mr Knuepling touched upon core topics such as the historical background of German federalism, the relevance of the Basic Law, the structure and importance of the Bundesrat, and the interaction and political dynamics between elected and civil society groups.

The study tour took place in Brussels and Berlin from 13th – 20th of October 2019. The delegation comprised representatives from the regional government of Bangsamoro as well as civil society actors. The Forum of Federations has recently completed programs in Philippines working directly with the government and civil society actor providing training and education to understand and articulate alternate governance options for the Philippines – multi-level governance and federal governance options that may provide solutions to the long and deep seeded conflict within Philippines. 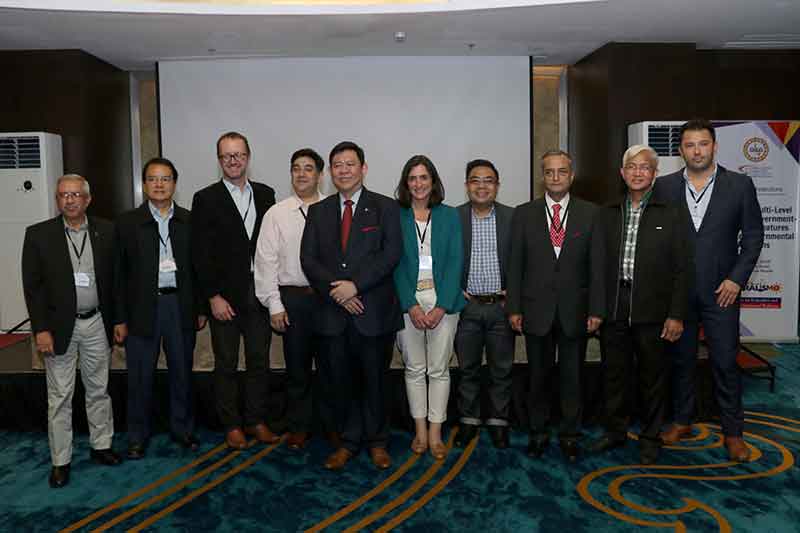 The Forum of Federations in collaboration with the Department of Interior and Local Government (DILG), the Centre for Federalism and Constitutional Reform (CFCR) and the Asia Foundation held an intervention on intergovernmental relations on the 11-12 May, in Manila, Philippines.

The event was held in support of the work of the Consultative Committee (Con Comm) which is appointed to review Philippines’ 1987 Constitution. This review seeks to address the ethnic and territorial tensions that exist within the archipelago. The event was attended by the members of Con Comm, its support staff as well as senior leaders from the DILG, leading academics and leaders from civil society.

A topic often neglected in constitutional design and one that was explored in depth at the recent event ‘Multi-level systems of government structural features and Intergovernmental relations’ is to consider how the different government levels will interact in order to bring about a functioning democracy.

The event was a timely message to Con Comm and other officials that intergovernmental relations (IGR) cannot in modern day society be left to spontaneous and sporadic developments and meetings. IGR must be planned; structured and pursued with the intent to ensure the different organs of government are interconnected; that common policies are pursued; and that fora are created to meet on a regular basis and with a clear agenda.

The participants to the workshop were very alive to the importance of IGR. The questions and discussions were in-depth; driven by a need to inform the constitution-writing process; and keen to learn from international experiences.

Con Comm members found it very useful to have experts from various countries available to respond first hand to the experiences of their country. The panel discussions enabled experts and Con Comm commissioners to comment on each other and also for the participants to engage.

In an interview during the event, Department of the Interior and Local Government (DILG) spokesperson Jonathan Malaya stressed the need to institutionalize IGR to address issues such as duplication of powers, lack of concentration, poor services, and wastage of public funds.

“Intergovernmental relations, whether it is a federal system or a devolved system in the Philippines, would be very crucial to improve the level of public service to our people,” Malaya said.

Malaya stated the DILG is committed in its push for federalism with the brand dubbed as “bayanihan” federalism.
“Under this cooperative federalism, we don’t focus on exclusive powers but focus instead on shared powers between the national and regional governments,” Malaya said.

The event sought demonstrates the importance of IGR mechanisms whether under the guise of decentralised reform efforts or a constitution shift towards federalism. Institutions and processes, which instil effective IGR practices, are essential to policy reforms, they are pivotal in diffusing regional tensions, and the allocation of powers and resources required to match service delivery to local preferences and needs – best achieved through intergovernmental dialogue and institutions.

The event was a great success and well attended by around 60, including Con Comm members and others who indicated the enormous benefit of the intervention. The event is part of a programme support by the Asia Foundation and the Australian Government. The Australian Government and the Asia Foundation Partnership in the Philippines is funding studies that are intended to contribute to the current public discussion on reform of central-local relations (including federalism). 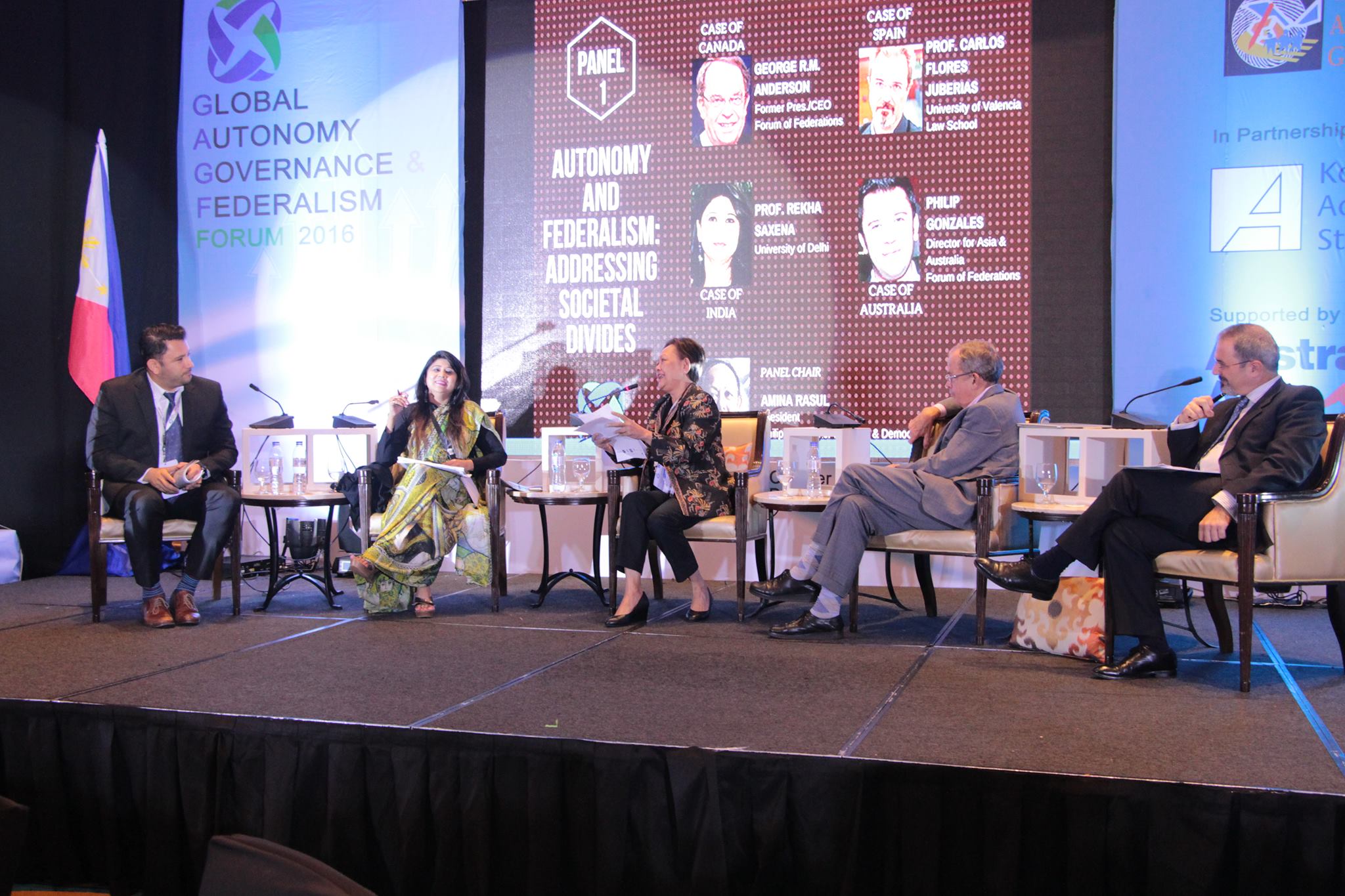 The Forum’s Director of Programs in Asia and Australia, Phillip Gonzalez, presented at the Global Autonomy and Governance Forum in Manila, Philippines.

Mr. Gonzalez was asked to speak on the panel “Federalism and Addressing Societal Divides” presenting an Australian case. His presentation focussed on Australia’s ‘Closing the Gap’ policy on addressing Indigenous disadvantage, he detailed some of the challenges of implementation, cooperation and coordination within Australia’s Federation. Here he illustrated how the ‘Close the Gap’ policy demanded major coordination across all levels of Australian governments.

Close the Gap sought to enable Indigenous Australians access to those same socio, cultural and economic opportunities as other Australians. Its targets focused on health, education, and employment outcomes; policy areas that involve all three levels of government and thus involved an incredible degree of intergovernmental cooperation. Mr Gonzalez described the COAG (Australia’s peak intergovernmental forum) decision which finally brought the issue into a coordinated policy framework which matched this decision with substantial resources at all levels of government in an attempt to address Indigenous disadvantage.

The Autonomy and Governance Forum focusses on an area of great importance. As a conflict resolution device, power sharing and autonomous arrangements for minority groups are central to peace negotiations. There are significant challenges in meeting these demands. Effective distribution of power to compliment policy and balancing demands for self-determination on one hand and the state’s inherent sovereignty on the other are major challenges.