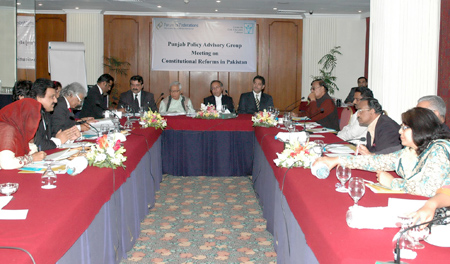 A meeting of a policy advisory group on federalism in Punjab province has called for the restoration of powers to Pakistan’s parliament and more autonomy for Pakistan’s provinces.

The gathering was designed to bring together experts and stakeholders from different walks of life and to develop a set of recommendations and amendments to Pakistan’s constitution.

On April 8, about one month after the meeting, Pakistan’s National Assembly voted unanimously to amend the constitution along lines similar to those proposed at the meeting. The Senate has yet to vote on the amendments.

The Lahore meeting of policy advisers from Punjab attracted 31 participants, including politicians, civil society members and academics. The discussion revolved around two main points: imperatives for constitutional reforms and prioritizing possible amendments to the constitution.

There was near unanimous agreement that the powers of parliament under the constitution much of which were stripped away by former leader General Pervez Musharraf should be fully restored. There was also a general consensus to grant more autonomy to Pakistan’s provinces. The yet to be resolved question is how much autonomy the provinces require.

Participants from political parties were most interested in the division of powers between the presidency and the prime minister and the issue of provincial autonomy. Civil society members called for the protection of rights for marginalized sections of society, especially women and religious minorities. The representatives of religious minorities spoke forcefully for the abolition of constitutional clauses such as the one that prohibits non-Muslims from serving as president or prime minister. Some participants said that Pakistan should adopt an entirely new constitution.

Participants described the meeting as a fruitful experience which not only presented a variety of perspectives on constitutional affairs but also provided a platform for dialogue. They said they hope that the discussions and various suggestions would be useful to the constitutional reforms committee in drafting its proposals.

Similar such meetings were held in other parts of Pakistan: