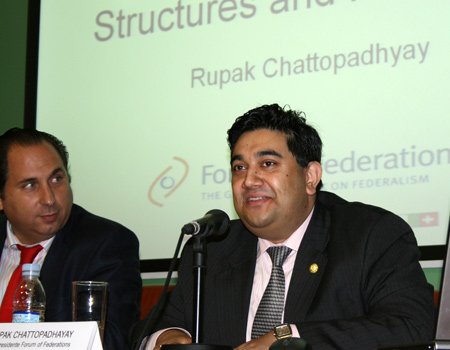 The pressures of ever increasing globalization and the clamour for good governance are forcing different orders of government in federal countries to work together and produce results more quickly.

That was the conclusion advanced by Forum Vice-President Rupak Chattopadhyay during a keynote address in Seville, Spain, at a recent conference on intergovernmental relations.

Participants at the conference, held to review and discuss various models of Intergovernmental Relations (IGR) in federal countries, included academics and practitioners of IGR from across Spain.

Drawing on the Forum’s ongoing IGR work, Mr. Chattopadhyay compared and contrasted the functioning of IGR in different federal countries and in those with federal attributes.

Mr. Chattopadhyay explained how IGR differs in its processes and results, and noted: "Intergovernmental relations are a vital aspect of governance in any federal country.”

A discussion period followed the presentation, during which members of the audience discussed co-operation among constituent units (such as provinces or states) in Canada, Australia and the United States.

The conference, titled Territorial Cooperation in Decentralized States was organized by the Centro de Estudios Andaluces in Seville and held on 1 October 2009. The event was hosted by the Andalusian Institute of Public Administration in Seville.