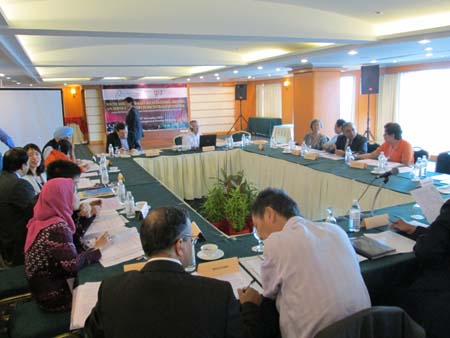 Participants during the meetings at Hotel Bayview Georgetown, Penang, Malaysia

The South and Southeast Asian Regional Meeting on Service Delivery in Decentralized Systems was held in Penang, Malaysia, November 28-30, 2012. Organized by the Forum of Federations and sponsored by the German Development Agency, GIZ, it involved 30 paticicipants including practitioners, top civil servants and academics from Mongolia, Nepal, India, Pakistan, Myanmar, Indonesia and Malaysia.

The Meeting was facilitated by the German diplomatic advisor Pietro Merlo of the Forum; Dr Clive Grace, Forum’s lead expert on the civil service reform study and former Director-General of the Audit Commission and Deputy Auditor-General for Wales; and Prof Francis Loh, Universiti Sains Malaysia, who served as principal organizer of the event .

The Meeting had four Sessions – Session 1: Decentralized Systems in Asia: An Overview and Session 2: The debates on Investment, Development and Governance were facilitated by Francis Loh. Pietro Merlo presented and led the discussions in Session 3: Civil Service Reform and its Realization, while Clive Grace did the same for Session 4: Service Delivery and its Application.

The major highlight of the Meeting was a Dinner with the Hon Lim Guan Eng, Chief Minister of Penang who delivered a Keynote Address on the Penang State government’s predicament in the highly centralized Malaysian federal system. He graciously launched the Forum’s latest publication: Civil Service Reform: Experiences of the United Kingdom, India, South Africa and Nepal, edited by Clive Grace. The dinner was co-sponsored by the Penang Institute, the State government’s â€˜think tank’ and was attended by top Penang state government civil servants and practitioners.

Conference participants had the opportunity to visit the Penang Development Corporation to exchange views on how the Penang government dealt with investment and development issues and the Penang Women’s Development Corporation to dialogue on how to promote gender responsive budgeting, among other issues, at the local level.
The highly motivated participants contributed to an intensive interactive discussion. They had the opportunity to get an overall picture of decentralized experiences and of the work of constitutional reforms concerning federalism in different countries. In Indonesia for example the introduced decentralization can not be considered as a blueprint and needs further elaboration as far as decentralised services are concerned and regarding improvements of bureaucratic reforms. The request of the Nepalese concerns a more direct support in revising the constitution as well as improvements in local bodies and their evaluation mechanism. In Mongolia there is a need to balance the state interests with a small population and the efficient delivery mechanism on the ground. Pakistan has a colonial and military past and therefore needs further constitutional reforms to protect fundamental rights and facilitate decentralised powers. In the case of India the process of redressing regional balances with the adequate distribution of resources is a priority. As far as Malaysia is concerned the country’s powers are still very centralized, however more and more the need for decentralisation is discussed by regions and the economic sectors. Myanmar is reviewing its constitution and asks for international advice after many years of isolation.
The common interest in the subject facilitated open, constructive and useful professional debates and the participants were very satisfied with the fruitful results of the discussions. However, there was a consensus for the need to have further follow up meetings on the democratic values in decentralized governmental structures. As mentioned repeatedly different Asian countries are reviewing their constitutions and are looking for new democratic and peaceful solutions, including the need of an international network.
Conference participants included: Syed Jaffar Ahmad and Azhar Saeed Malik (Pakistan); Ravi Dhingra and Dalbir Singh (India); Dyah Mutiarin (Indonesia); Chitra Lekha Yadav, Dharani Dhar Khatiwada and Shanta Bahadur Shrestha (Nepal); Myambaya Yadamsuren and Battuvshin Bat Ochir (Mongolia); Daw TYin May Aung and Daw Mya May (Myanmar); and Tricia Yeoh, Wong Chin Huat, Mohd Faisal Syam, Toh Kin Woon, Wee Chong Hui and Anil Netto (Malaysia).