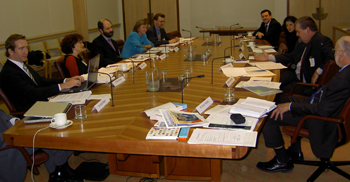 Participants at the Forum’s Global Dialogue round table on foreign relations in Canberra.*

Key members of Australia’s Parliament and senior officials from the Australian states gathered recently in Canberra to discuss how Australian states participate in the natione’s foreign policy, and how to enhance their involvement in foreign issues. The select group of practitioners and experts also included senior staff from federal ministries, assistants to Australian premiers and academics. The March 30 country round table was organized by the Forum of Federations as part of its Global Dialogue program. Similar events are to be held in 11 other federal countries around the world. The round tables on foreign relations will feed into an international round table to be held in Canada in October 2006. The results of all these events will be published in a forthcoming book and a concise booklet.

Participants at the round table talked about major reforms that were made to the Commonwealth of Australia’s treaty-making process. The 1996 reforms included the establishment of a Parliamentary Committee, the Joint Standing Committee on Treaties, which is generally regarded as an effective body, and a Treaties Council comprising the heads of the federal government and the six state governments, which is viewed as having been less successful. The premiers of the six Australian states will be meeting with the Canadian premiers in a special meeting in Montreal on April 11

– a meeting organized by the Canadian Council of the Federation.

Participants debated the effects of globalization and its impact on the States. In the past the most contentious treaties concerned human rights and environmental issues, but that today it is the negotiation of trade treaties, such as the Free Trade Agreement with the United States, which is having the greatest effect upon the states.

The Australian officials also discussed the operation of the Standing Committee on Treaties, which is composed of a committee of officials from the federal and state governments. This body meets regularly to discuss treaties of importance to the states. The states took the view that the level of consultation with the sub-national units, on treaties of significance to them, has improved greatly. But they believe that additional work needs to be done to co-ordinate how treaties are to be implemented, once entered into.

The Global Dialogue on Federalism is a joint program of the Forum of Federations and the International Association of Centers for Federal Studies. The program creates forums around the world through which experts exchange experiences, ideas and academic research to identify emerging challenges and to inspire new solutions.