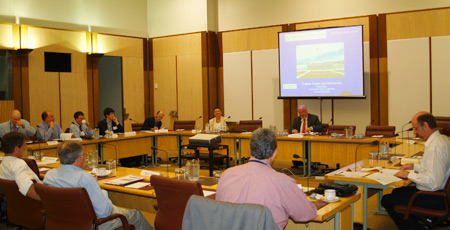 Australia’s federal arrangements may need to change in order to handle traditional issues such as water resource management and emerging issues such as response to climate change.

This desire for change was an underlying concern at the recent Australia roundtable in the Forum of Federations’ Global dialogue series on political parties, civil society and federal democracies that was convened recently at Parliament House in Canberra.

Prof. Steve Dovers, Director of the Fenner School of Environment and Society at the Australian National University, explained the impact of federalism on resource and environment management in Australia. Because ecosystems and natural resources cross boundaries and borders, co-operation between the states and the federal government is critical for environmental management.

While tasks have been devolved to regional authorities, there has been no matching devolution of power. This has reduced the opportunities for civil society to play a role in influencing environmental policy and practice.