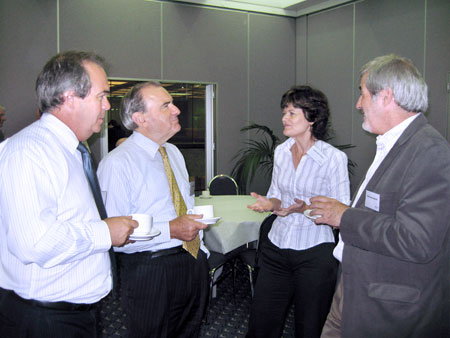 When state and federal cabinet ministers meet in Australia, important issues are often decided upon, participants learned at a recent Global Dialogue in Sydney.

The roundtable was part of the current round of the Forum’s Global Dialogue on Federalism, which brought together senior public servants, policy advisers and academics.

Indeed, several roundtable participants concurred that agreements among federal and state officials are most often reached when relations between the states and the federal government are congenial.

Participants agree that both formal and informal intergovernmental relations were seen as integral to the effective functioning of the Australian federation, however, the roundtable attendees were divided over whether these mechanisms could address the increasing centralisation of policymaking authority by the central government, called the Commonwealth, and the central agencies. Participants were also undecided on whether the Australian federal system is flexible enough to function well in the absence of formal constitutional change.

Perhaps the most controversial topic was the capacity of the federal system to switch to a co-operative form of federalism following the federal election in which current Labour Prime Minister Kevin Rudd was elected in November 2007. The period in power of Rudd’s predecessor, John Howard, was perceived as one of "coercive federalism.”

Participants agreed that for the previous decade relations between the states and the Commonwealth were weak. Some participants said that hints of these negative relations were recently revived by the increased workload imposed by the Council of Australian Government (COAG) Reform Agenda and by the Rudd government’s attempts to have state governments help implement Rudd’s election promises. Other participants, however, spoke more favourably bout the prospects for genuine co-operation among the current federal and state governments.

The topic that generated the most interest was that of the autonomy afforded to first ministers and other ministers when they participate in COAG and ministerial council meetings.

The sole participants at the COAG meetings are the prime minister, state premiers, the chief ministers of the Northern Territory and the Australian Capital Territory, and the president of the Australian Local Government Association.

Time constraints mean that some policy decisions are taken without premiers and chief ministers consulting their respective cabinets. At Ministerial Council meetings attended by federal and state ministers, it appears that most ministers have a degree of autonomy depending upon how the prime minister and premiers want to manage their cabinets.

In cases where policy matters are restricted to a minister’s portfolio and do not constitute a budgetary item, the ministers usually have some autonomy.

But in so-called "whole-of-government matters,” ministers tend to refer issues outside their portfolio back to their cabinet. Occasionally, ministers exceed their authority and end up being disciplined. Interestingly, it was learned that in an effort to ensure accountability, ministers from the state of South Australia have to present a paper to their cabinet colleagues both before and after ministerial council meetings.