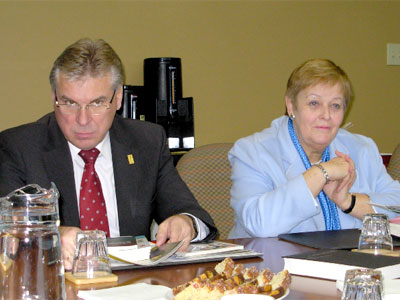 A delegation from the Federal Council of the Republic of Austria recently visited the Forum of Federations during its five-day mission to Ottawa, Montreal and Toronto.

The Austrian delegation came to Canada to share ideas with Canadian practitioners on health and social policy, immigration and constitutional reform.

Forum president George Anderson briefed the delegation on the work of the Forum and on the basics of Canadian federalism.

The Federal Council is the Upper Chamber of Austria’s Parliament. It is composed of 62 members who are indirectly elected by state Parliaments.

The Austrian delegation was led by Mr. Wolfgang Erlitz, M.P.President (speaker) of the Federal Council.

The Forum meeting on Nov. 26 was the first stop for the delegation. The Austrians’ visit to Canada took place from Nov. 25 – 30, 2007. It was organized by the International and Interparliamentary Affairs Directorate of the Parliament of Canada. The delegation also met with Canadian parliamentarians, members of the Legislative Assembly of Ontario and Toronto Mayor David Miller.