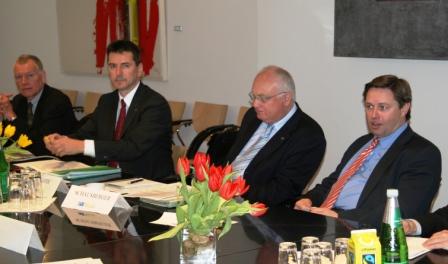 From left: Wolf Okresek, member of the Forum’s board, Andreas Kiefer, Land Salzburg, Franz Schausberger , Director of the Institute of the Regions of Europe, and Reinhard Platzer, Director General of Kommunalkredit AG – one of the sponsors of the event – at the roundtable in Vienna

Austrian experts and practitioners gathered recently in Vienna to discuss and debate the key challenges and issues that local governments in Austria are currently contending with. The discussions highlighted the challenges that local communities in Austria are facing, challenges which are shaped by different electoral systems, structures of associations and other fundamental differences of the Austrian LÃ¤nder.

The roundtable was part of the Global Dialogue on Federalism. It was organized by Dr. Franz Schausberger of Salzburg University; and Andreas Kiefer, Director of the European Affairs Office of the Land of Salzburg. Participants included Helmut MÃ¶dlhamer, president of the Austrian Association of Municipalities and Towns; Sepp Rieder, former deputy mayor and treasurer of Vienna; Georg Lienbacher, director general of the constitutional service in the federal chancellery; and Dr. Wolf Okresek, a member of the board of the Forum of Federations and former head of the Constitutional Law Department at the Federal Chancellery.

The Austrian roundtable was held on March 15. Other Global Dialogue roundtables on the theme of Local Governments and Metropolitan Regions in Federal Countries have been held in London, Canada; Jos, Nigeria; Rio de Janeiro, Brazil; New Delhi, India; Bern, Switzerland; in Chicago, U.S.; Berlin, Germany; Madrid, Spain; in Sydney, Australia; in Cape Town, South Africa; and in Mexico City, Mexico. On April 19-22 an international roundtable will be held, followed by the publication of a book. The local government theme is the Forum’s sixth in the Global Dialogue series.

Read an article on the event from the Austrian magazine ‘Kommunal’