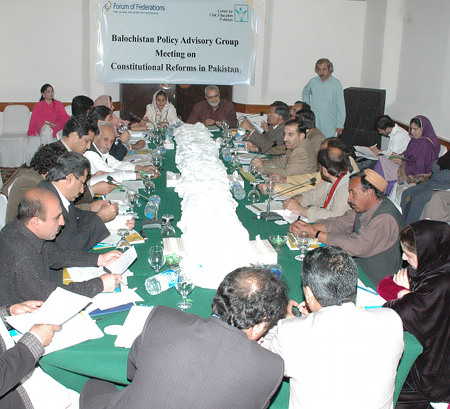 More than 40 members of political parties, civil society organizations plus professors and students from Balochistan University met in Quetta, the capital of Balochistan, to propose reforms to Pakistan’s constitution.

The individuals who gathered on March 5, 2010, were part of the Balochistan Policy Advisory Group on Federalism, organized by the Centre for Civic Education Pakistan and the Forum of Federations.

The topic of discussion was to propose reforms to Pakistan’s constitution that would meet the demands for increased democracy and federalism in Pakistan.

The citizens at the meeting debated constitutional issues and put forth views from different sections of the society, and worked to develop shared recommendations.

Some participants voiced their preference for a secular system by removing all Islamic clauses of the constitution that discriminate between citizens on the basis of their religions while one suggested more Islamisation of the Basic Law.

Most political party representatives advocated more powers for the prime minister and parity of power between the Senate and the National Assembly. Most also recommended renaming of the Northwest Frontier Province to Pakhtunkhwa, greater autonomy and increased resources for the provinces, and the reframing of the foreign policy according to the wishes and aspirations of all the federal units.

There was general support for increasing the rights of minority ethnic and linguistic groups. Some politicians suggested redrawing provincial boundaries on an ethno-linguistic basis and election of the President and the Prime Minister on a rotation basis from all the federal units. Members of several civil society groups and academics supported legislation guaranteeing rights of women, in particular to guarantee female representation in the provincial assemblies. Most participants called for educational reforms and recognition as national languages for Pashto, Balochi, Punjabi, Sindhi and Seraiki.

Similar such meetings were held in other parts of Pakistan: