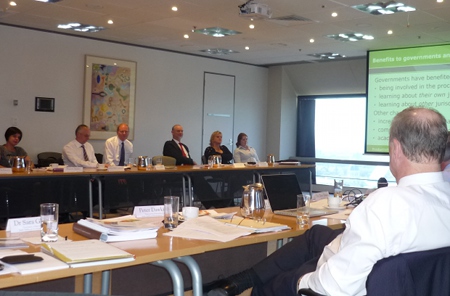 Participants discuss benchmarking at a Forum workshop in Melbourne on October 19 and 20, 2010.

The Forum held a two-day conference on benchmarking on October 19 and 20, 2010, in Melbourne, Australia.

The event, part of the Forum’s Benchmarking in Federal Systems program, was organized in co-operation with Australia’s Productivity Commission, an independent research and advisory body.

The conference focused on the extent to which benchmarking can add value to existing federal arrangements – either through improved intergovernmental relations or by generating better results for citizens.

Benchmarking can be broadly defined as a tool for improving performance by learning from best practices and the processes by which they are achieved.

Professor Alan Fenna of Curtin University, Australia, the Forum’s lead expert on the program, opened the conference with insights that were gained from two extensive research and interview trips to Europe and North America.

Prof. Fenna said that benchmarking programs can vary significantly in their effectiveness. At one end of the scale, benchmarking can be a highly complementary arrangement for federalism. At the other end, it can wind up as yet another way in which traditional federal norms are eroded or altered.

"There are serious challenges involved in getting benchmarking to deliver significant improvement in substantive outcomes,” said Fenna.

The international experiences were then contrasted with approaches to benchmarking in Australia, which has the longest tradition of benchmarking exercises conducted between the federal government and the states.

Helen Silver, Secretary of the Department of Premier and Cabinet, Victoria, presented her view on Commonwealth State benchmarking and the state of the Australian federalism. Gary Banks and Lawrence Macdonald from Australia’s Productivity Commission discussed public services delivered by the states.

The benchmarking initiatives of the Council of Australian Governments (Reform Council) recently set up to improve the Australian intergovernmental machinery, were presented by Mary Ann O’Loughlin. In a panel discussion, Ben Rimmer (Commonwealth Government), Ken Smith (Government of Queensland) and Peter Dawkins (Government of Victoria) discussed the challenges and the future of benchmarking in Australia.

Prof. Fenna concluded that benchmarking can contribute to improved service delivery and also provide a viable alternative to stricter controls though challenges exist in generating reliable and genuinely indicative data, in relating outputs to outcomes, and identifying and incorporating practice improvements.

"Central governments would thus seem to have an important role to play in facilitating co-operation of that nature”, said Fenna.

A joint publication of papers presented at the conference is planned, along with future benchmarking workshops in Switzerland, and possibly Germany and Canada.