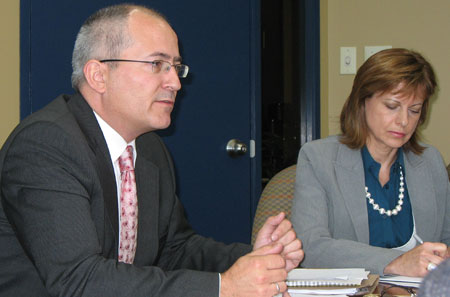 Professor Charlie Jeffery, left, of the University of Edinburgh speaks at Forum offices on May 16, 2007. Celine Auclair (Forum vice-president, research and governance programs) sits to his left.

The 10-year process of devolution in the United Kingdom has been done in a piecemeal fashion and lacks a broader U.K. wide perspective, says Professor Charlie Jeffery of the University of Edinburgh.

Jeffery shared his analysis of the shortcomings of the U.K. devolution in a presentation on May 16, 2007, in Ottawa at the Forum of Federations. His remarks were shaped in part by the May 2007 election in Scotland that saw the secessionist Scottish National Party win more seats than any other party, but fall 18 seats short of a 65-seat majority.

Devolution occurred in 1997 in the U.K., when a Scottish parliament was created, as were assemblies for both Wales and Northern Ireland.

Professor Jeffery noted that while devolution is favoured by the majority of Scots, the ‘piecemeal approach’ with which it has been done creates many problems.

‘Too little thought has been put into crafting the institutional relationships needed to underpin the Anglo-Scottish partnership after devolution’ said Jeffery.

Among his main concerns is that the distribution of powers has been loosely managed – and undertaken without considering the effects on other parts of the U.K.

Jeffery pointed to Australia, Belgium, Canada and Germany as examples of countries with governments which have established techniques for managing and resolving tension between the central government and the constituent units. But the U.K. lacks processes and ‘institutional techniques for balancing the whole and the parts,’ he said.

Professor Jeffery is Co-Director of the Institute of Governance at the University of Edinburgh. He has produced several publications, including Devolution & Electoral Politics (Manchester University Press, 2006). His work has focused on three main areas: German politics, comparative territorial politics, and devolution in the U.K.