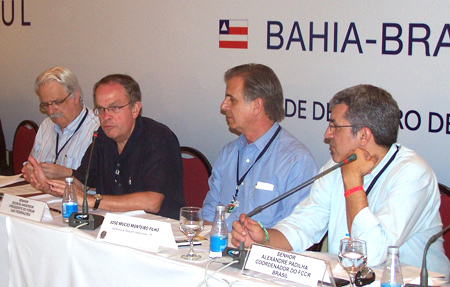 The Forum’s other partner governments include Australia, Canada, Ethiopia, Germany, India, Mexico, Nigeria and Switzerland.The Forum has been working in Brazil for several years, primarily in a program that has provided the South American country with a variety of international experts in fiscal federalism.

George Anderson, the president of the Forum, expressed his great satisfaction that Brazil has become the first South American country to become a partner of the Forum.

The Brazil signing took place on Dec. 15, 2008 at the plenary session of the Consultative Forum of Municipalities, States, Provinces and Departments of Mercosur, a Latin American trade partnership among the countries of Argentina, Brazil, Paraguay and Uruguay.

Mercosur, called the Common Market of the South, is aiming to expand its existing agreements to include the free movement of goods, capital, services and people among its member countries. It covers a geographic area four times the size of the European Union and includes 250 million people.

The Mercosur session was opened by Mr. Jaques Wagner, the Governor of the Brazilian State of Bahia, and by Jose Mucio Monteiro Mucio, the Minister of State, and Chief of the Secretariat of Institutional Relations of the Presidency of the Republic of Brazil.

The purpose of the plenary session was to present the results that took place during the Brazilian presidency of Mercosur over the last six months, and for Brazil to hand over the presidency of the trade partnership to Paraguay.

Among those participating at the event were several governors, a number of mayors, and government officials and representatives of municipal associations – of all four Mercosur countries, as well as of Venezuela.

Mr. Anderson spoke to the gathering about the work of the Forum, and the Forum’s long and productive involvement in Brazil.