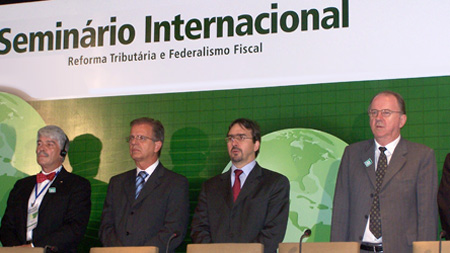 The Government of Brazil is seeking to implement a harmonized country-wide Value Added Tax (VAT), and recently co-hosted a seminar in Brasilia with the Forum of Federations, where the highlights of the reform were debated. About 250 people attended the event held March 5-6, 2008, in Brasilia.
The seminar was the first public discussion of the tax reform, which was recently sent to the Congress by the federal government for adoption. Tax reform has been on the political agenda in Brazil for the last two decades and a number of proposals submitted to the Congress during that period were not ratified.
The main objective of the reform is to adopt a dual VAT consisting of a state and a federal component. This system has been proposed as a means to reconcile two competing concerns: the need for tax harmonization and the need to respect the autonomy of Brazil’s 27 states.
The proposal was described to participants by Dr. Bernard Appy, Secretary for Economic Policy with the Federal Ministry of Finance. After setting out the drawbacks of the present tax regime, Mr. Appy listed the objectives of the reform, which include simplifying the tax system; ending the fiscal turf-war between Brazilian states; correcting the distortions in the tax structure that harm investments and efficiency; and improving regional development policies and the quality of relations between Brazil’s federal government, its states and its municipalities.
The three main themes addressed in the seminar were:

The seminar was opened by Alexandre Padilha, Brazil’s deputy minister for Federal Affairs; JosÃ© Mucio Monteiro, Minister of Institutional Affairs; Mr. Appy; Mr. JosÃ© Trindade, Secretary of Finance of Para and the representative of the Fiscal Forum of the Brazilian States; Mr. Marcio Pochman, President of the Institute for Applied Economic Research (IPEA) and leaders of the three major municipal associations. The ambassadors to Brazil from Canada, Germany and Switzerland were also present, as well as representatives from the embassies of India and Nigeria. The Forum was represented by Board member Roger Wilkins and Diana Chebenova, program manager for South America. Fiscal expert Anwar Shah of the World Bank also participated.

The main features of Brazil’s draft tax reform are:

* Elimination of five federal taxes and replacing them with one federal VAT. This would take effect in the second year after the reform is approved.
* Simplification of the VAT now in effect in Brazil’s states. This will mean that only one law will govern the VAT country-wide instead of the current 27 laws. The tax rates will be uniform. CONFAZ, a council made up of the treasury secretaries of Brazil’s 27 states, will be able to propose the tax rates, and the Senate will either approve or refuse them.
* Re-arranging the logic of the tax system to the so-called destination principle (instead of origin principle). The process will be completed over 8 years, starting in 2010.
* Setting up a fund for equalization of revenues, and another fund for regional development

The Forum provided three experts for the seminar, Dr. Mahesh Purohit of India, Dr. Michael Schneider of Germany, and Mr. Wilkins of the Forum of Federations. The Forum organized the event in partnership with three institutions of Brazil’s federal government: the Institutional Affairs Secretariat, Ministry of Finance and Institute of Applied Economic Research; and the Fiscal Forum of the Brazilian States.