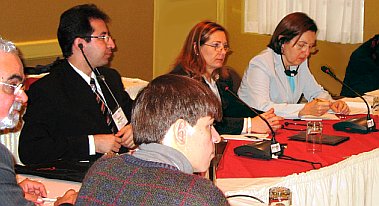 A group of government finance officials from Brazil took part in a four-day study tour of Canada organized by the Forum of Federations. Starting in Ottawa on Dec. 11, 2006, they learned about Canada’s fiscal arrangements from Jonathan Will of Finance Canada and had an introduction to Canadian federalism from Professor FranÃ§ois Rocher of the University of Ottawa.

The group was offered an introduction to Canadian fiscal arrangements by David PÃ©loquin of the Canadian government’s Privy Council Office as well as a presentation on Canada’s intergovernmental tax policy by Paul Berg-Dickof Finance Canada. In honor of their visit, the group attended a lunch hosted by President George Anderson of the Forum of Federations and also toured the Canadian parliament buildings.

The tour included a two-day stay in Quebec City, where the group met with officials from the Quebec ministry of finance and had presentations from the province’s ministry of intergovernmental and Canadian affairs and were greeted by other Quebec officials.

The Brazilian officials taking part in the tour came from the states of Bahia, SÃ Â£o Paulo, Pernambuco, Rio Grade Do Norte, Mato Grosso, GoiÃ¡s and Minas Gerais. The delegation was led by FÃ¡tima Correia Guerreiro of Bahia, Gedalva Baratto of Parana and Roseana de Carvalho Soares of Pernambuco. The study tour was co-ordinated by David MacDonald, the Forum’s director of Partnerships and Development.