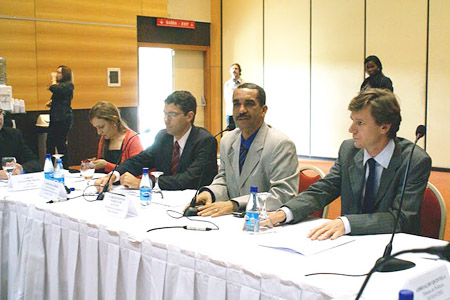 A roundtable on Fiscal Federalism and the Struggle Against Regional Inequality was recently held in Brazil to discuss the role that resource distribution has played in fostering improved federal-state-municipal relations in Brazil while helping to reduce inequalities in the country.

The roundtable also provided an opportunity to compare Brazilian experience with Spain and Germany, with regard to the distribution of resources from the central government to states and municipalities.

The event was an initiative of Brazil’s Under-Secretariat of Federative Affairs of the Secretariat of Institutional Relations of the Presidency, in cooperation with the Forum of Federations and the Bahia State Finance Secretariat. It was held on July 22 23, 2010 in the city of Salvador.

Erik Fasten, from the Federal Republic of Germany, told his Brazilian hosts that the autonomy of German LÃ¤nder (states) has been greatly reduced over the last decades while the German states have benefited from increased transfers.

But Mr. Fasten said that has not necessarily translated into improved development outcomes for the German states. This led Mr. Fasten to question whether the mere redistributing of resources should indeed be favored over the adoption of economic development strategies.

Mr. Santiago Miguez of Spain underlined his country’s high degree of decentralization, where transfers from the central government are given without any strings attached. He said that Spain’s fund guaranteeing the provision of essential public services is an example of a dynamic equality-building measure in his country.

Brazilian expert SÃ©rgio Prado noted that the decentralization of political powers in Brazil since 1988 has caused states and municipalities to incur a burden yet to be precisely measured.

Luis Eduardo Sebastiani, the president of the Brazilian Association of Capital Cities’ Finance Secretaries, concurred with Mr. Prado’s views. He stressed the need to assess such burdens and to re-work the revenue distribution arrangements.

Carlos Alexandre Rocha, a consultant with the Federal Senate, presented a study he prepared on Brazil’s State Participatory Fund, the body that is meant to re-distribute the funds. He said that despite being a mandatory, unconditional, redistributive, non-offset fund, it has failed to withstand economic shocks while providing poor redistributive results.

The topic sparked vigorous debate among participants, so much so that the moderator, AloÃ­sio Almeida, the Director of Education of the Ministry of Finance’s School of Public Finance Administration, undertook to raise the topic with the Fiscal Policy Observatory, a body of public finance experts and managers who meet monthly.

In attendance were the under-secretaries of National Treasury and Revenue Collection in Brazil, several state secretaries of finance, the president of the Brazilian Association of Capital Cities’ Finance Secretaries and representatives from the Institute of Applied Economic research (IPEA), the Social and Economic Development Council (CEDES) and the Federal Senate.