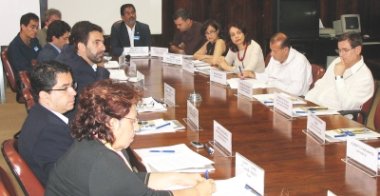 A group of 25 Brazilians experts recently gathered in Rio de Janeiro to discuss the role of local governments and metropolitan regions in Brazil.

The country roundtable was part of the Forum of Federation’s Global Dialogue program.

The Dec. 1 event was organized by the ObservatÃ³rio das MetrÃ³poles and coordinated by Prof Luis Cesar Ribeiro. The roundtable was attended by participants from all over Brazil including Sheila Villanova Borba from Porto Alegre, Catia Wanderlei Lubambo from Pernanbuco, and Fernando Rezende from the Getulio Vargas Foundation in Rio de Janeiro.

Brazil is one of a few federations to constitutionally recognise local governments, an arrangement that adds a third order to the division of responsibilities. The main topic of discussion was Brazil’s innovative consÃ³rcios pÃºblicos, or public consortiums, which serve to share the costs of costly public services among several constituent units and as many as three tiers of government.

Other Global Dialogue roundtables on the same theme will be held in New Delhi, India on Dec. 9; in Bern, Switzerland on Dec 21; in Madrid, Spain on Jan. 26; and in Sydney, Australia on Feb. 9. Other roundtables were held in London, Canada on Oct. 16 and in Jos, Nigeria on Nov. 1. Others are planned for Austria, Germany, Mexico and the United States.

Later next year, an international roundtable will be held in South Africa, followed by the publication of a book. The local government theme is the Forum’s sixth in the Global Dialogue series.