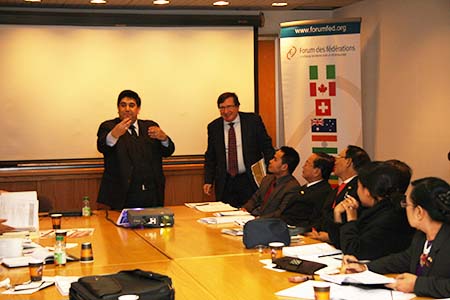 (left-right) The President of the Forum, Mr. Rupak Chattopadhyay and Mr. Pietro Merlo, Senior Advisor to Forum speaks to the Burmese Parliamentarian delegation on April 22, 2013.

On April 22, 2013 a parliamentary delegation from Burma met with the representatives of the Forum of Federations. The training mission of Burmese parliamentarians to Canada was implemented by the Parliamentary Centre in Ottawa with the support from the Glyn Berry Program of the Global Peace and Security Fund of the Department of Foreign Affairs and International Trade of Canada. The Burmese delegation was composed of eleven members of Parliament, representatives from different parties, and high ranking officials from the Parliament Office in Yangon. 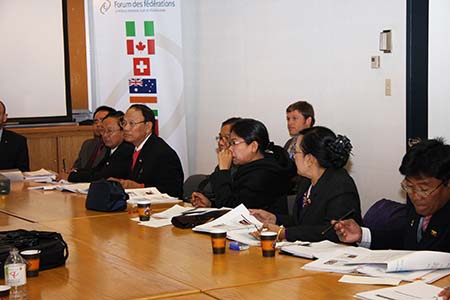 The President of the Forum, Mr.Chattopadhyay, informed the delegates about the Forum’s work. His presentation was followed by an intensive debate, which showed the political will of Burmese people for reforms and to move the country away from decades of authoritarian governance. The Forum’s intention is to further contribute to Canada’s foreign policy approach in Burma and to support those Burmese working inside and outside Burma, to promote human rights, fundamental freedoms and a transition to genuine democracy. Between November 2012 and February 2013 the Forum organized training sessions and workshops in Burma on different aspects of federalism. While progress is visible, it is the general opinion that Burma’s transition is far from complete and will face further challenges. The members of the Burmese delegation and representatives of the Forum agreed to the need of further dialogue through training, provision of expertise, and impartial practical education. The Burmese delegation expressed its hope to continue the debate of national reform to be able to stabilize the country and avoid national unrest. 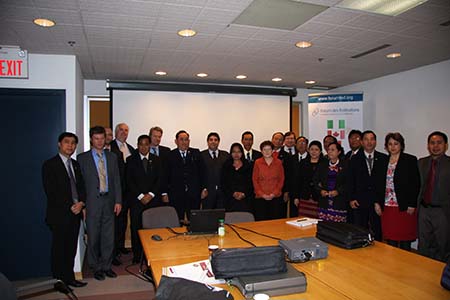 The delegation was composed of the following participants: