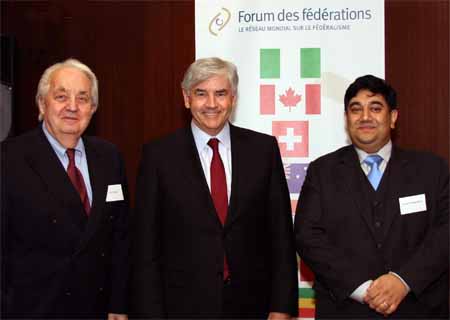 Gilles Paquet from the University of Ottawa (left), The Honourable Lawrence Cannon, Minister of Foreign Affairs (center) and Rupak Chattopadhyay for Forum of Federations

The Forum of Federations in partnership with the University of Ottawa’s Centre on Governance hosted a colloquium on Canada’s Federal Capital Region on the 28-29 of January. The two day event was convened to explore the future of the nation’s capital and outline the governance and planning issues that will confront Canada’s Federal Capital. The event is part of series of organized around the world drawing on the Forum’s work on the governance and financing of capital cities in federal countries. 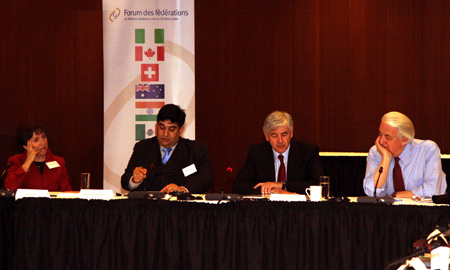 This dialogue was inaugurated with a keynote address by the Federal Minister for Foreign Affairs, the Honourable Lawrence Cannon. Minister Cannon, who underscored the importance of planning and highlighted the need for such a dialogue the Minister responsible for overseeing the last mandate review of Canada’s National Capital Commission. This event brought together Canada’s leading experts on local and municipal finance and governance issues. The event was moderated by Gilles Paquet Professor Emeritus at the Telfer School of Management, University of Ottawa and Chair of the 2006 mandate review.

The event was organized around four working sessions including an introductory presentation on comparative findings on capital city finance and governance in eleven federal countries by Enid Slack and Rupak Chattopadhyay. The four sessions on Ottawa dealt with a range of issues local and national issues. The session on–The Specific Challenges of Canada’s Federal Capital Region’ was introduced with lead commentaries by Andrew Cohen, Caroline Andrew, Clinton Archibald and Meyer Burstein focused on the challenges of creating a capital which symbolizes the country’s values. The session–Transborder Potentialities’ focusing on region’s location at the cusp of Anglophone and Francophone Canada and how this might be harnessed was introduced by Louise Poirier, AndrÃ© Juneau, Jean Perras and Katherine Graham. The session on –The Planning and Governance’ considered both planning and infrastructure management issues, as well as issues of better coordination among multiple jurisdictions which converge on the Ottawa area. The session was introduced by David Gordon, Marni Cappe, Andrew Sancton, and Jaques Legendre. The final session introduced by Enid Slack, Almos Tassonyi and Allan Maslove considered optimal and sustainable funding models options for the federal capital.

Proceedings from the colloquium are intended to facilitate a larger dialogue on the federal capital and will be published in the fall by University of Ottawa Press.