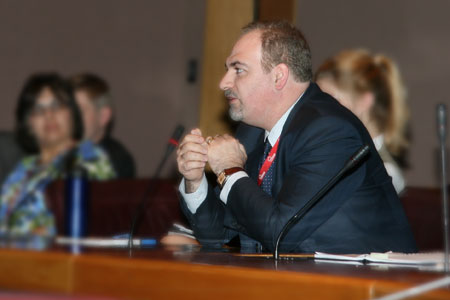 Jean-Philippe Tachdjian of Foreign Affairs and International Trade Canada (DFAIT) comments on a presentation on the Forum’s work on diversity at DFAIT offices in Ottawa.

More than 40 officials from various Canadian government departments attended a recent briefing by the Forum of Federations on its work on diversity.

The briefing was provided by Rupak Chattopadhyay, the Forum’s Senior Director of Global Programs, at the Ottawa headquarters of Canada’s Department of Foreign Affairs and International Trade.

Mr. Chattopadhyay explained in his talk that issues of diversity are increasingly important to federal countries, which increasingly face demands from minorities for equal rights, the protection and accommodation of minorities and for the right to full participation in a common public sphere.

He noted that while all federal countries contend with issues of diversity, not all reflect the same degree and type of diversity. As such, different institutional arrangements and strategies are needed to accommodate these diversities.

Mr. Chattopadhyay also updated his audience on the plans for the 5th International Conference on Federalism to be held in Addis Ababa, which is being co-organized by the Forum and the Government of Ethiopia.

A roundtable discussion was held after Dr. Chattopadhyay’s presentation and participants asked questions and offered comments. Attendees were also given copies of the latest publication from the Forum’s Global Dialogue Program, titled "Dialogues on Diversity and Unity in Federal Countries.” 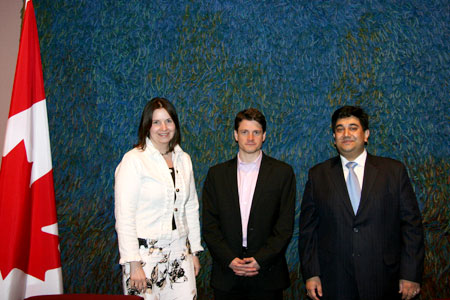 Alison Clement, Senior Advisor with the Department of Foreign Affairs and International Trade Canada (DFAIT) (left) and Denis Stevens (middle), Director General, Intergovernmental Relations and Public Outreach, DFAIT, pose with the Forum’s Senior Director of Global Programs, Rupak Chattopadhyay, after a presentation on the Forum and its work on diversity at DFAIT offices in Ottawa.