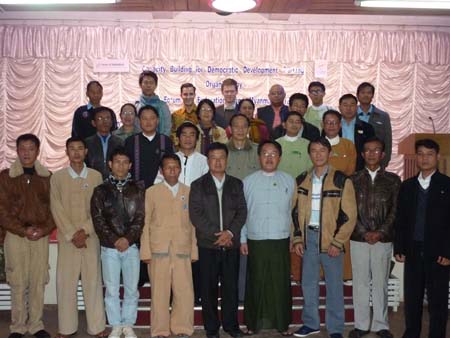 Politics in Burma have witnessed a noticeable change since the military transferred government authority in 2011 to a quasi civilian government. A notable element of the nascent democratization process has been the publicly stated desire of the government to accommodate diversity the failure of which resulted in violence and conflict in Burma for decades and to effect reconciliation with the rebel groups.

President Thein Sein had pointed out that the national unity with ethnic nationalities would be his priority. He underlined the need to accord equal rights to ethnic minorities and the need to acknowledge the multi-ethnic nature of Burma. He criticized the official policy of systematic "Myanmarnization” of the country. His government has also been working towards tentative peace deals with ethnic rebel groups and other proscribed elements. In the last two years, rapid progress has been made in reaching preliminary ceasefire agreements with nearly all the armed ethnic groups in the country, except for the Katchin Independence Army that is still engaged in fighting with the Burmese army in the North of the country.

In recognition of the move towards democratization of the Burmese polity, the international community has eased certain sanctions and suspended others that had been imposed on the Government of Burma. Canada has also declared that it intends to open an embassy in the country in recognition of Burma’s willingness to move away from a highly authoritarian setup and initiate a process of democratization. In addition, the Department of Foreign Affairs and International Trade (DFAIT) has mandated the Forum of Federations to support the transition to democracy through a training program on democratic governance.

As part of this program, the Forum in cooperation with its local partner Myanmar EGRESS delivered four 2.5 day training sessions for parliamentarians, politicians, civil society representatives and media personnel about the practice of democracy and power sharing. The objective of this training program was to enhance the capacity amongst Burmese decision makers to make informed decisions on options for democracy and decentralization and to increase knowledge amongst key civil society stakeholders and journalists on various governance options and models. Ultimately, the Forum hopes to make a contribution to a stable democratic system in Burma and a political process that is responsive to the needs of citizens.

The third training was held in the administrative capital of Shan State, Taunggyi (Jan 28-30, 2013), and the fourth again in Yangon on Feb 2-4, 2012. Those two training sessions were delivered by Sandeep Shastri, Felix Knuepling (Head of Programs, Forum of Federations) and Indraneel Datta (The Habibie Center, Indonesia).

The intensive training was offered to 120 Burmese stakeholders, among them parliamentarians from the two chambers of parliament, state parliamentarians and ministers, party executives, civil society representatives, journalists as well as youth organisations. Sandeep Shastri, the lead expert of this program has also developed the training methodology and curriculum. 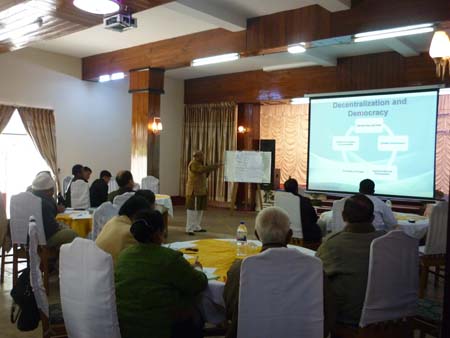 Members at the Workshop

Examples of other countries that have undergone major reform processes in terms of democratic transition and managing diversity, including in a post-conflict settings, were presented and discussed in the training sessions. The focus was on a discussion of examples of the region (Asia). The four training sessions followed the same patter. The First day of the training opened with an overview dialogue on Decentralization and Federalism. It was followed by a session on Decentralization and Federalism as Instruments of Ensuring Unity in Diversity. The following session was a Group Discussion in which participants reflected on the Day’s Learning and applied the same to their situations in Myanmar. 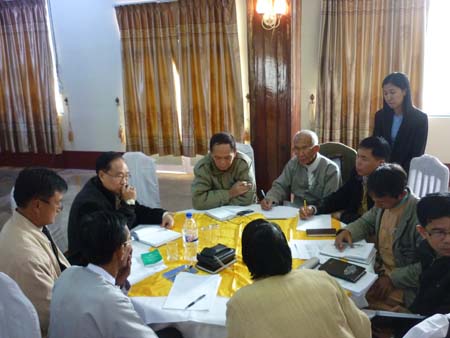 Members at the Workshop
The second day of the Workshop began with a presentation on Constitutional Arrangements for Federalism and Decentralization. This session also included an explicit discussion of the potential contribution a decentralization process could make to the empowerment of women, discussing the Indian example of guaranteeing 30% of the seats in local parliaments for women. This was followed by two sessions on Federalism and Decentralization in Developed and New Democracies. The day concluded with a Group Work Session in which participants reflected on Global experiences and learning for Myanmar. 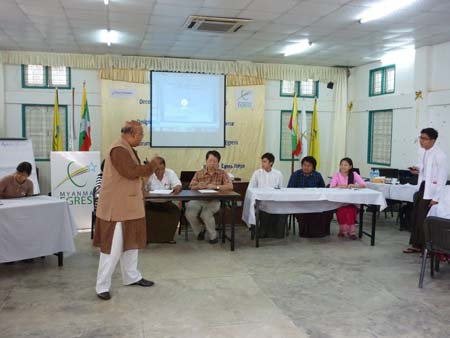 Members at the Workshop
Day 3 commenced with a discussion on Financial Arrangements and Decentralization / Federalism, followed by a presentation of a Case Study. In the first two trainings, Malaysia was chosen as the case study, while Indonesia was the case study in the third and fourth workshops. Prior to the conclusion session there was a brief dialogue on strategies to take the learning of the training to the real world of practice.

As part of the project, the Forum translated some of its educational material into Burmese, including its DVD "The Challenge of Diversity”. The DVD is also accessible through the Forum’s website. https://www.youtube.com/user/forumoffederations 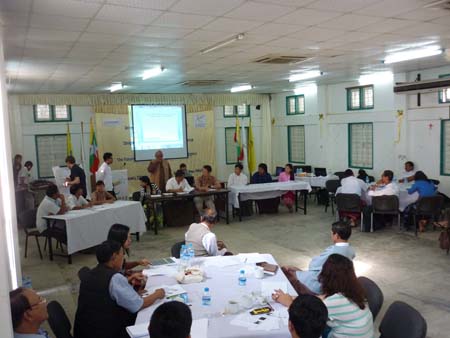 Members at the Workshop
By offering participants different alternatives, stakeholders were enabled to better conceptualize and formulate their version of a democratic Burma that is at peace with itself and the larger international community. The Forum is grateful for the support it received from DFAIT’s Glyn Berry Program for Peace and Security to implement this project.