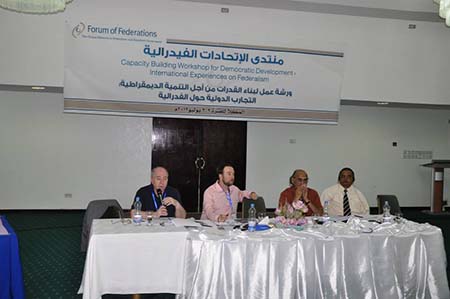 Workshop held in Yemen on Federalism and Decentralization

Yemen is one of the poorest countries in the world, ranking 133rd (of 169) on UNDP’s 2010 Human Development Index, and corruption is endemic. Relying heavily on its small and declining oil-resources Yemen, which has one of the fastest growing populations in the region, faces enormous challenges. Its north-south political and economic divide (approx. 80 % of GNP is generated in the former South, which only hosts about 10 % of the Yemeni population), southern grievances, secessionist movements and tribal rivalries are further underlying factors which destabilize and weaken the Yemeni state.

Between 1990 and 1994, after merging formerly independent North Yemen and South Yemen, unified Yemen experimented with federalism. However, this experiment failed, largely because North and South Yemen had sharply contrasting political systems. Elections to the new parliament were held in April 1993, but civil war and a secessionist movement of the South again occurred in 1994.

Despite the failed experiment with federalism in the early 1990s, nowadays, more and more Yemeni politicians view federalism as the best solution for Yemen to disentangle itself from its recurring crises. Others see decentralization and local governments invested with wide powers as the most appropriate solution that will guarantee the country’s unity. With either scenario, it is inevitable that a post-Saleh set up for a united Yemen will entail significant devolution. While a number of southern politicians have pushed for either separation or a bi-polar federation, some form of multi-state federalism, with perhaps four or five regions, is favored by the northerners as well as by staunchly pro-unity parties, such as the ruling General People’s Congress and the opposition Islamist party, Islah. But much more precision about the details of this model will be required before it does so.
Currently underway is an eight month long National Dialogue Conference, with sub-committees tasked to examine various models of federal and devolved governance. To support these national discussions, the Forum of Federations will organize – between June and December 2013 – several capacity-building sessions to inform the deliberations on governance models and power-sharing, the majority of which will take place outside of the capital city of Sana’a.

As part of this program, the Forum delivered two 2.5 day training sessions for politicians and civil society representatives about the practice of federalism, decentralization and power sharing. Each training session was attended by thirty-five participants. The objective of this training program was to enhance the capacity amongst Yemeni political actors to make informed decisions on options for federalism and decentralization and to increase knowledge amongst key civil society stakeholders on various governance options and models.

The first training session took place in Taiz, on June 29-July 1, 2013 and was opened by Taiz Governor, Shawqi Hayel Saeed, and Canada’s Ambassador to Saudi Arabia, Tom MacDonald. The second session took place in Mukalla, Hadramawt on July 2-4, 2013 and was opened by Hadramawt Deputy-Governor Omar Mbarak and the Ambassador of Yemen to Canada, Khaled Mahfoudh Bahah. Both workshops were facilitated by David Parks (Senior Advisor to the Forum, Canada), Reinold Herber (Senior Advisor to the Forum, Germany) and Ash Narain Roy (Director, Institute of Social Sciences, India). The Forum’s expert team also delivered two outreach events, attracting over 200 attendees: the first at the al-Saeed Cultural Center in Taiz, and the second at the University of Hadramawt in Mukalla.

The Forum’s program in Yemen is sponsored by the Department of Foreign Affairs, Trade and Development, Government of Canada.

Information about the event can be found at the Facebook Page:
https://www.facebook.com/ForumOfFederationsProgramInYemen?bookmark_t=page

Below is some media coverages (Arabic):
Information about Forum of Federations in newspaper: