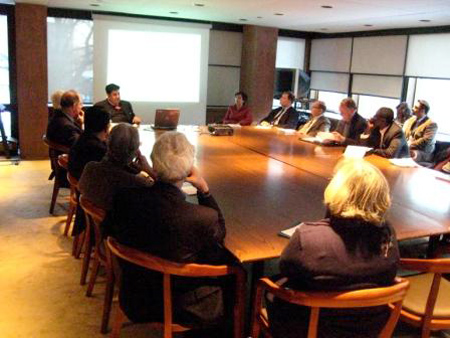 The Forum of Federations and The Institute of Municipal Finance and Governance co-hosted a roundtable discussion to examine the financing and governance of capital cities in federal countries.

The main aim of the roundtable was to contrast the advantages and disadvantages of particular governing arrangements, as well as the implications that different forms of governance have on the fiscal autonomy of cities and local municipalities.

Much of the discussion focused on the question of whether federal capitals are really different from capitals of non-federal countries; as well as discussions on the status of the city of Ottawa, and the history of difficulties around trying to create an autonomous national capital – in other words, a federal district.

The general consensus was that the choice of federal capitals is particularly fraught because such cities have to be seen to be representative of the country’s diversity, as well as providing a neutral space for the conduct of public policy.

The roundtable provided an opportunity for Enid Slack, the Director of the Institute on Municipal Finance and Governance, and Rupak Chattopadhyay, Vice President of the Forum, to share the findings of the Forum’s recent work on the subject titled Finance and governance of capital cities in federal systems.

The Institute of Municipal Finance and Governance is based at the Munk Centre for International Studies at the University of Toronto.

The discussants included Almos Tassonyi from the Government of Ontario; Richard Stren from the University of Toronto; and Beth Moore Milroy, Professor Emerita, School of Urban and Regional Planning, Ryerson University.

The event was attended by about 40 participants mainly from the City of Toronto and the Ontario Government.

The roundtable, held in Toronto on Feb. 11, 2010, was chaired by Alan Broadbent, the Chair of the institute.