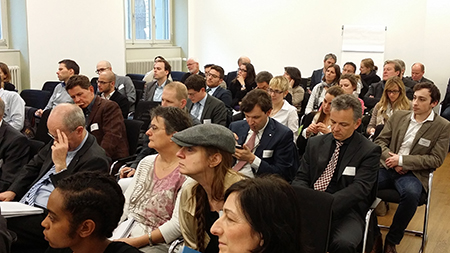 The Forum of Federations, in cooperation with the Conference of Cantonal Governments (CCG), organized an event at the House of Cantons in Bern, Switzerland on centralization and federalism on the sidelines of its Annual Board Meeting held March 16 19.

Introducing the event, Dr. Sandra Maissen, Secretary-General and Executive Director of the CCG, highlighted the CCG’s commitment to upholding the interests of the cantons at all stages in the political decision making process in the Swiss Confederation. She also emphasized the well-established history of cooperation between the CCG and the Forum in organizing joint activities as well as the CCG’s role as one of the formal partners and contributors to the Forum. 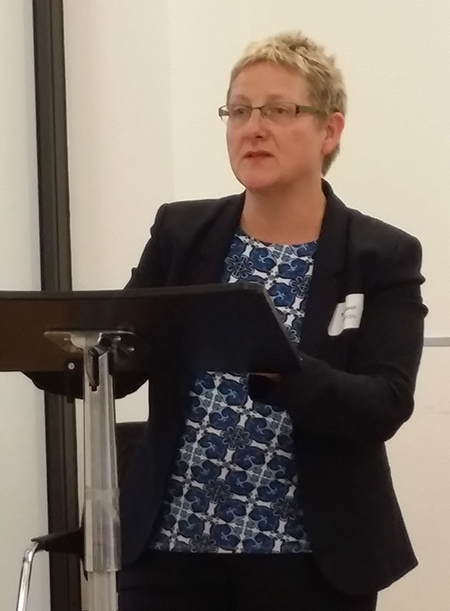 Benedikt WÃ¼rth, President of the ch Foundation for Federal Cooperation and Member of the Government of the Canton of Saint Gallen, presented the cantonal point of view. He identified the renewal and continued development of federalism as a key priority of the cantons. The Swiss Constitution enshrines principles of subsidiarity, fiscal equalization and the cantons’ right to have a voice in national policy. The monitoring of federalism report, organized by the Foundation, identified centralization as a major trend in recent years. Pressure to centralize at the Confederation level comes from both the federal parliament and federal administration and it has been evident in the areas of education, special planning, social issues, energy, and health. In addition, globalization and European integration are exerting pressure for centralization through an increasing number of treaties with implications in areas of cantonal competence. While central regulations may allow for the creation of better solutions, federalism itself demands that nuances between the cantons are possible. Identifying the clear allocation of responsibilities between the Federation and the cantons as the best method to prevent one-sided burden of responsibilities, Mr. WÃ¼rth identified measures proposed by the cantons to counter centralization, including creating limited constitutional jurisdiction over federal legislation, giving cantons a greater role in federal foreign policy, a review of the division of tasks and responsibilities between the Confederation and the cantons, the involvement of the cantons at early stages in the preparation of federal initiatives, and independent responsibility of the cantons. In this bottom-up arrangement of governance, it is the role of the cantons to make every effort to ensure the continued success of Swiss federalism. 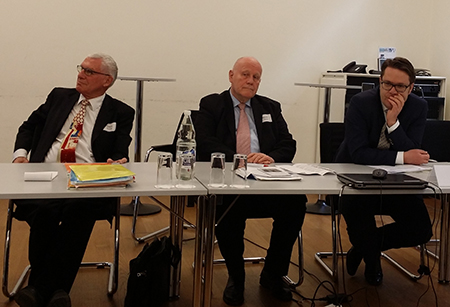 On the German case, Georg Milbradt, Chairman of the Board of Directors and former Minister-President, Saxony, highlighted its unique trends. He likened centralization and decentralization in Germany to a pendulum swinging back and forth. The first 20 years of the federal republic promoted centralization, with the center subsidizing and co-financing areas of exclusive state power. "Cooperative federalism” in Germany furthered this trend by formalizing instruments for central influence on state policy and in establishing fiscal equalization, including shared income and VAT taxes. Pressures for European integration led to decentralization alongside the principles of subsidiarity, competition and transparency. States were given greater legislative powers and the number of areas of joint center-state action was reduced. With the upcoming third federalism reform for fiscal equalization, it is yet to be seen whether Germany will shift towards greater state autonomy or equalization, though Mr. Milbradt posited a shift towards greater cooperation and less state autonomy in the republic.

Subsequently, introduced by Georg Milbradt, members of the Board of Directors presented on decentralization and centralization trends in their respective federations.

Andreas Eshete, Advisor to the Prime Minister of the Federal Democratic Republic of Ethiopia, put forth that it is too early in the history of Ethiopian federalism to discuss overall trends. Nonetheless, Mr. Eshete noted that there are some concerns of the country moving towards centralization; these include the planning and documentation of economic development falling within exclusive federal control, control of the dominant political party at both the national and local levels, and an imbalance between sources of revenue and expenditures. To the contrary, he sees the current arrangements for development in Ethiopia as having greater decentralization than that provided for in the constitution. The way in which economic development has focused on diverse interests of the rural poor in the provision of goods and services to support development extends beyond centrist tendencies of market discipline. 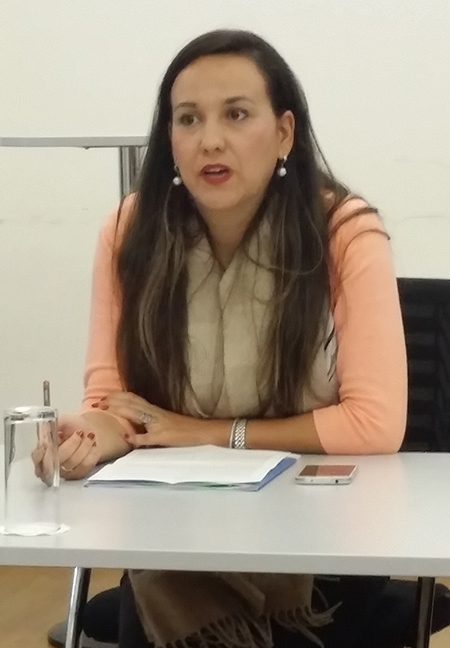 Ana Carolina Lorena, Advisor for International Affairs, Under Secretariat for Federative Affairs of the Presidency of the Republic of Brazil, identified a gradual trend towards decentralization since Brazil’s transition to a federal state in 1889. She noted that the history of centralization or decentralization in Brazil was strongly linked to the economy and productive means of the country. When federation was established, states had a great power over the federation. The democratic period between 1946 -1964 was marked by a slight decentralization. Following centralization imposed by the Brazilian military government, the 1988 Constitution furthered democracy in recognizing the status of municipalities independent of the federal and state governments. The trend since 1988 has been slow and gradual decentralization. Since that time, Brazil has continued towards decentralization through broadened municipal competences in primary service delivery, growth in the number of municipalities and increases in financial transfers and municipal revenues, all of which have contributed to human development in the country. A certain degree of centralization is necessary in Brazil, Ms. Lorena noted, for strategic development aimed to overcome regional inequalities and different institutional capacities of the municipalities, as well as to be able to effectively respond to economic cycles.
Hare Krushna Dash, Secretary of the Inter-State Council Secretariat, Ministry of Home Affairs of the Government of India, spoke of the peculiarities of Indian federalism: despite the Constitution providing for a "union of states”, there is no mention of federalism. This "union of states” has been interpreted as a center and many states, each with powers of governance, and that India was unitary by nature, but federal by character. But in the last 60 years India showed many of the centralizing tendencies, such as appointment of governors by the center, centrally recruited civil service, and similar. Three lists were created by the 1950 Constitution thus giving legislatives powers to either union, states or both. Revenues from various sources were allocated to union and the states, with a vast basket of revenue collection flowing to the center. With the emergence of regional parties and political diversification, demands for more federalism emerged in 1967-70. Different commissions were set with the aim of giving recommendations, devolving powers, separating of responsibilities and talking to the states. Today, the consensus in India is that both the center and the states must be strong, leading to both cooperation and competition with the net outcome of increasing overall efficiency in the country.

Johanne Poirier, Professor at the Public Law Centre of the UniversitÃ© Libre de Bruxelles, began her presentation stating that the Canadian federation, created in 1867, was very centralized and has gradually became more decentralized. After World War II, federal authorities used their taxing and spending powers to invest in areas of exclusive provincial jurisdiction in the process of strong nation building. This process was partly reversed in the 80’s and 90’s with federal government withdrawing from some of these areas. Reflecting on developments over the last fifteen years, Ms. Poirier mentioned that the failure of constitutional reforms in Canada has led to the idea that the Canadian Constitution cannot be reformed and that changes must occur in other ways, including in a political, administrative or ad hoc manner, which ultimately means reinforcing the executive and promoting cooperative federalism. There is an overlap in the competences of the federal government and the provinces despite explicit delineation of responsibilities in the constitution, reinforced by the courts’ interpretation of overlapping competences. Increasingly, the Canadian federal government is contracting with provinces for provincial delivery of services in areas of federal government legislation. At the same time, the federal government disengages from multilateral relations with the provinces and enters into bilateral relationships. 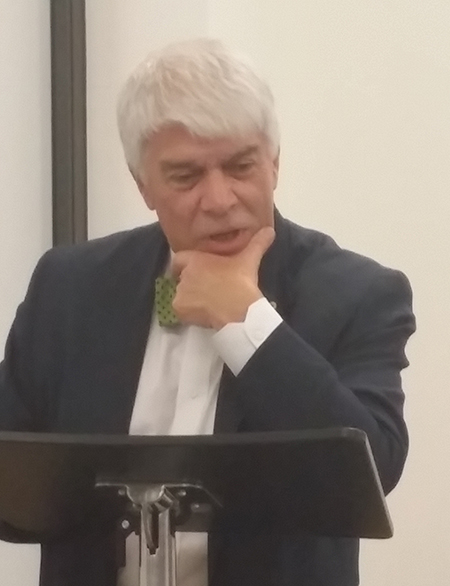 The Australian case presented by Roger Wilkins, former Secretary of the Attorney-General’s Department of the Commonwealth Government of Australia spoke of the geographic and historical rationales for federalism in Australia. With relatively homogenous cities and states, federalism exists due to its efficiencies in preventing excessive power of the center, competition between jurisdictions and responsiveness in decision making. Trends towards centralization in Australia have made states agents of the central government, with the central government making decisions and possessing resources that are used as levers to get states to follow through on national policies. The high court has also exercised a very centralist view of the powers of the federal government. Mr. Wilkins concluded by saying that he was not aware of any decentralizing tendencies at the moment. 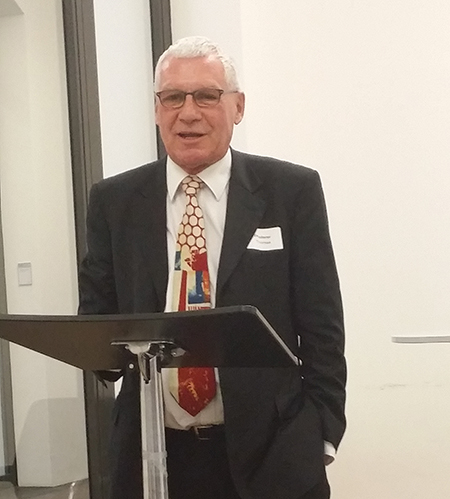 Thomas Pfisterer, Attorney-at-Law, Former Council of States, Member/President of the Government of the Canton of Aargau and Judge at the Swiss Supreme Court provided a summary and related the presentations to the case of Switzerland.

The event concluded with discussion amongst attendees and presenters. Key themes to emerge were the need to strike a balance between respecting diversity in federal systems while maintaining coherence within the federation, highlighting recent examples of the referendum in Scotland and calls for decentralization in Ukraine. It was emphasized that diversity and pluralism are worthwhile in their own right. Nonetheless, each federation must find its own balance that allows for local involvement in decision making while maintaining solidarity and strength of the whole. Any solution must take into account the unique history, diversity and institutions of a country. Building on the Forum’s core principle "learning from each other” it is this type of event that allows states to share expertise and lessons learned to further discussions on federalism and strengthen federal systems across diverse countries.