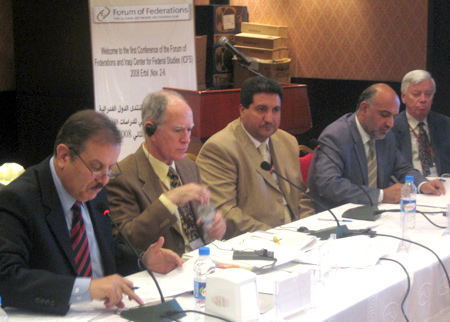 Law professors and government officials from all parts of Iraq gathered recently in the city of Erbil, Iraq to formally launch the Iraqi Center for Federal Studies in a conference organized by the Forum of Federations.

Participating in the event were 45 professors of law and political science and 25 officials from the Government of Iraq and the Kurdistan Regional Government. The professors formed part of a core of 68 academics from 18 universities previously trained in federalism by the Forum during a series of three two-week courses held in Jordan.

The event was opened by Dr. Idris Hadi Saleh, the Kurdistan Minister of Higher Education; Dr Mohammad al Saraj, Director of Research at the Ministry of Higher Education in Baghdad; and by Ms. Margaret Huber, Canada’s Ambassador to Iraq.

In launching the Iraqi Centre for Federal Studies (ICFS), the professors also unanimously agreed to a constitution for the Center. They also approved the establishment of branch offices and elected a nine-member implementation committee to gain official government registration as an autonomous institution.

The training of the Iraqi professors in federalism and the founding of the federal studies centre are meant to solidify the understanding of federalism by senior academics, and provide for it to be learned by the next generation of students of law and political science, thereby ensuring that this form of governance, adopted by the people of Iraq in 2005, will take traction.

The conference also secured the support of the Government of Iraq and of the Kurdistan Regional Government, which will continue participating in 2009 in federalism courses delivered by the Forum, and in becoming partners with ICFS in future training on federalism.

Government participants included members of the Council of Ministers’ Secretariat in Baghdad, senior officials of the Kurdistan Regional Government, the High Judicial Council in Baghdad, the civil service training academy in Baghdad and several officials from the governing councils of Iraq’s subnational units, which are called governorates.

Presentations were also made by the United Nations Assistance Mission in Iraq (UNAMI) and by the National Democratic Institute (NDI).

In discussing the structure and vision of the agreed ICFS constitution, participants benefited from a presentation by Dr John Kincaid on the background and global activities of the IACFS, the International Association of Centers of Federal Studies.

The Forum of Federations has been providing constitutional advice and training in many areas of federal governance and federalism to Iraqi officials, parliamentarians, academics and media since 2004. During 2009 and 2010, about 100 officials from the Government of Iraq and the Kurdistan Regional Government will participate in several federalism courses in the region.

The conference, held from November 4-6, 2008, is a component of the Forum’s Iraq program. The Forum’s work in Iraq is funded by a $2 million grant from the Canadian International Development Agency.