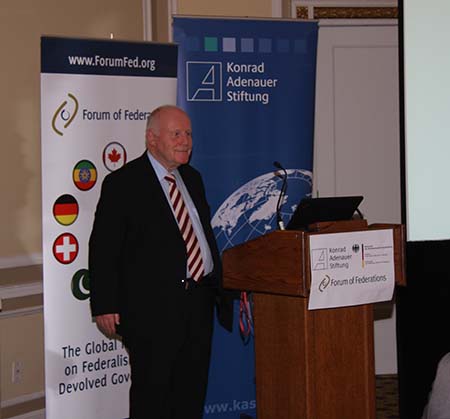 Dr. Georg Milbradt above presenting to representatives from the political, academic and diplomatic field on Feb 9-12, 2014.

Dr. Georg Milbradt visited Ottawa in his function as the Chairman of the Board of Directors of the Forum of Federations from 9th to 12th of February 2014.

Dr. Milbradt is also a Vice-President of the Independent Advisory Committee of the German Stability Council. His political career includes being Prime Minister of the Federal Free State of Saxony.

During his visit in the Capital of Canada, Dr. Milbradt had the opportunity to meet representatives from the political, academic and diplomatic field. He also met with the Minister of Foreign Affairs, Trade and Development (DFATD) of Canada John Baird for an exchange of views and the future work of the Forum.

Dr. Milbradt was invited to deliver a speech at the DFATD to a selected audience of 50 Canadian Diplomats on: “Views on the Developments of Last Years in Eastern Europe and Russia, Considering in Particular the present Ukrainian Situation”. In his lecture Dr. Milbradt showed that the present situation in Eastern Europe has its roots and explanation in the past. History and previous political decisions created a new power play which is able to endanger the security and stability not only of Europe, but also on a worldwide scale. According to him, a division of Ukraine would not be the best solution. It would be better in the interest of the Ukrainian people to keep the nation united and develop a decentralized state with a federal structure and with connections both to the European Union and Russia. The Questions and Answer period showed a big interest in the German view of the relationship of Russia with the EU. 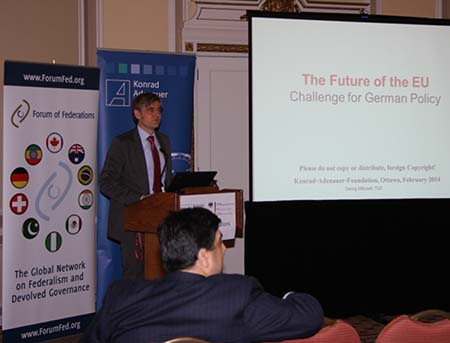 On February 10th the Forum of Federations jointly with the the Konrad Adenauer Stiftung organized a presentation by Dr. Georg Milbradt at the Fairmont Chateau Laurier on the current situation of the Euro and the financial system in Europe.

Following opening remarks by the Resident Representative of the Konrad Adenauer Stiftung, Dr. Lars Hansel, Dr. Milbradt began by assessing and explaining the problems of the Euro-zone and the possible solutions which could be attainable. This focused on the dual objectives of the Euro, politically and economically speaking. The Maastricht Compromise was highlighted as well as the persistent problem with competiveness and economic flexibility which require continued attention. Dr. Milbradt then delved into a concise overview of the Euro Crisis of 2008 and the Bubble in the Periphery which preceded the crisis. For those who were not specifically knowledgeable about the intricacies of the crisis or the situations in Greece, Spain, Portugal, and Ireland received an informative summary, which allowed Dr. Milbradt to then segue into potential avenues to solve the crisis and rectify the inefficiencies inherent in the system. Dr. Milbradt was specifically praiseworthy of the Irish approach which he suggested the other struggling countries should adopt in order to return to competitive vibrancy and responsible financing. 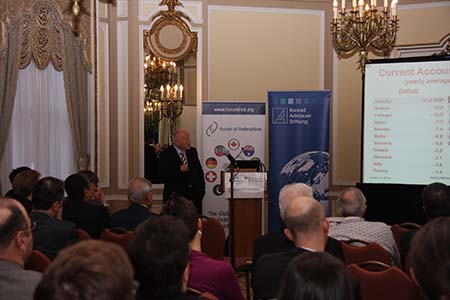 Dr. Milbradt in turn criticized both the "rescue policy” of the European Central Bank (ECB) and the strict policy of austerity which has been pursued. The former simply treats the symptoms of the crisis and the latter makes the situation worse due to the inflexibility of goods and labour markets in the South. To stabilize the Euro system the ECB had to overstretch its legal mandate and execute a regional redistributionary fiscal policy, which is understandable in the short-run, but is not acceptable for the longer future ("no taxation without representation”). He explained that the reason the South failed so dramatically was because its social and political inflexibility simply made it uncompetitive against the explosion of manufacturing and development in Eastern Europe. Additionally now that the South was a part of the Eurozone the established practice of devaluing its currency was no longer an avenue of economic remedy.

Dr. Milbradt showed that he was a proponent of debt forgiveness stating that, "in a family you should never lend money on credit. You cannot build a united Europe on the basis of debtor-creditor relations.” He also highlighted that the work of economic recovery does not only lie at the feet of Greece and Spain but Germany must accept a considerable reduction in export surpluses as well. The crisis and process of recovery has generated significant political turmoil, making Germany and Europe unpopular in the South. Alternatively, unlimited transfer of capital from the North has become something to be feared and avoided in the eyes of the North. Dr. Milbradt closed this section of his lecture out by highlighting three specific problems which must be solved to truly resolve the crisis and avoid a relapse: 1) Reduction of excessive public and private debts, "To me, this means partial forgiveness,” 2) Restoration of Southern competitiveness and 3) The founding of better European structures to avoid similar crises in the future.

The final portion of the lecture pertained to the central thrust of Dr. Milbradt’s that in order to truly bring about economic stability, political evolution must match the structure of banking, monetary, fiscal and economic policy. The time of simply muddling along with short-term approaches and stalling tactics needs to come to an end, Europeans have to truly assess what they want from their Europe, more centralization or decentralization:

â€¢ A United States of Europe would entail a strong, democratically elected central government, which executes common fiscal and economic policies, supervises the nation-states and stabilizes the economy (due to a substantially larger central budget, common unemployment benefits, and common fiscal equalization systems).
â€¢ A decentralized EU which is primarily based on the principles of subsidiarity and autonomy (like Switzerland), means the return to no bail-out policies and the possibility of bank and state bankruptcies.

Dr. Milbradt highlights the pros and cons of each of these approaches and simply states it’s up to the European people to decide what they want for their Union. They are at an important historical juncture where they can no longer delay or "muddle-through” any longer, but must choose the future they desire!

This lecture was followed by a lively question period, seeing both the Ambassador of Hungary and the Deputy Ambassador of the Czech Republic pose inquiries to Dr. Milbradt, which allowed him to flesh out the developing policy of the new German government and clarify a number of his suggestions. Milbradt closed by remarking that currently there is no real solution, he "only knows what kind of sustainable solutions are possible,” which requires frank public discussions by all stakeholders and a clarification on what kind of Europe the citizens of Europe wish for. The political demand of "More Europe,” is not enough. 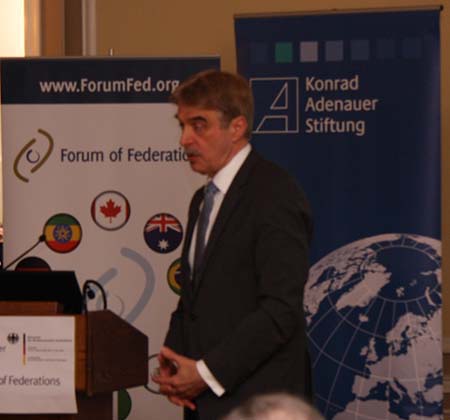 The German Ambassador Werner Wnendt closed out the talk and thanked Dr. Milbradt for his outstanding and frank lecture. Ambassador Wnendt reaffirmed the German prerogative and commitment to solidarity within the Union and highlighted the important and strengthening partnership the EU has with Canada. The lecture was a massive success which was received gratefully by the esteemed audience of more than 80 people, who continued the discussions and inquiries into specifics throughout the reception afterwards.

At the University of Ottawa, Dr. Milbradt again had the opportunity to deliver a lecture on an important European issue: “A Currency in Search of its State. The Future Prospects of the Euro”. This event was sponsored by the Konrad Adenauer Stiftung. He outlined in a clear and academic way the origin of the Euro. Although there existed some advantages before Euro was introduced such as a possibility to balance currency problems, the lack of common currency hindered trade transactions. Dr. Milbradt also pointed out the advantages of the Euro system, but stressed that a lack of a politically coherent Euro system cannot meet financial and economic deficiencies. According to Dr. Milbradt the crisis of the Euro is not over and will become even more problematic. In his view many European countries will suffer basic economic problems. Dr. Milbradt offered various academic and practical solutions to give to the Euro zone options to overcome the difficulties or at least to reduce negative consequences. The debate that followed the lectures between students and professors showed that there is no easy way to satisfy all the interests of the governments involved and that compromises have to be found in the spirit of solidarity and peace. In Dr. Milbradt’s view the EU must remain united and although there are critical situations only the EU can be the future of Europe. A solution could be to create a federally structured EU.