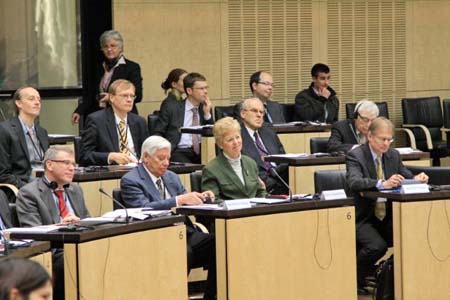 Pakistan’s is a country which is rich in diversity whether of Race, Ethnicity, Language, Religion and Culture, although diversity helps facilitate communication between people of different backgrounds, life styles, and belief systems, leading to generation of greater knowledge, understanding and peaceful coexistence. The religious and ethnic minorities and other marginalized groups have suffered till date due to the policy of the state of not accommodating diversity in the structure of the state.
The Centre for Civic Education and Forum of Federations embarked on a series of Provincial Advisory Group Consultations in all the four Provincial Capitals of Pakistan. The process was initiated to institute an informed debate and discussion on managing and celebrating diversity of Pakistan. It provided an opportunity to learn from the experiences of other federal systems on how they have managed to celebrate diversity in the midlist of similar challenges. The last of these meetings was held by the Punjab Advisory Group in Lahore on 10th February 2011.
50 stake holders, including former Education Minister of Punjab, Advisor to the Governor of Punjab on Human Rights, Formers MPA’s, politicians, civil society members, media representatives, students and government representatives attended the consultation. 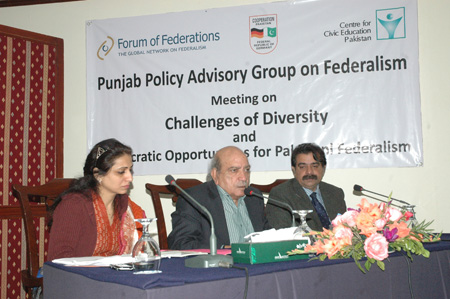 Ms. Noreen Haider moderated the consultation she introduced the project and deliberated upon the specifics of diversity and it importance after the 18th Constitutional Amendment when a significant political autonomy has shifted to the provinces. The Key note address was given by Mr. I.A Rehman, Director of the Human Rights Commission of Pakistan (HRCP) who gave a historical background of how diversity has been managed in various constitutions of Pakistan and how that has affected the socio political culture of the state and its units. He said that states are strengthened when they accept pluralism. Pakistan is a pluralistic society and this needs to be recognized and a comprehensive policy in the constitution need to be made to accommodate diversity.
In the Second session, Mr. Ahmed Saleem from Sustainable Development Policy Institute (SPDI) gave a case study on "Cultural Diversity in Pakistan with reference to Punjab”.
Muhammad Mushtaq, Assistant Professor and PhD Scholar gave a case study on "Ethnic Diversity & Federalism in Pakistan”. He argued for the case of decentralized federalism in Pakistan and said that Pakistan needs a relatively more decentralized federal design to manage ethnic diversity. Pakistan has a large population and ethno-linguistic groups are, more or less, geographically concentrated. In this given situation, federalism is the best option to provide autonomy to geographically concentrated communities. A relatively decentralized federal system can address the grievances of smaller communities like autonomy, representation in jobs, more funds for development, allocations of funds in NFC Award, and water issues.
Mr. Sajjad Naseer Professor of Political Science, University of the Punjab (Political Scientist), & political analyst and Dr. Javed Chandio, Director of Khawaja Farid Chair (Sufi Saint), at the Islamic University Bhawalpur, were panelists at the "Unity in Diversity” session. Prof Sajjad gave a synopsis of how the British managed diversity in the sub continent and said that the political centre of the colonial times did not interfere into the religious, cultural and social practices of the units and this non interference into the diverse communities’ social fabric was the success of their rule. The discussions highlighted the contrasting approaches that India and Pakistan have taken towards the management of diversity since their independence.”
This round of Provincial Advisory Group consultations will culminate at a meeting of the National Advisory Group at the Federal Capital in March or April 2011. The Recommendations of these provincial and national meetings will be forwarded to the decisions makers with the aspiration that these would help in making diversity recognized in the Pakistani political system. 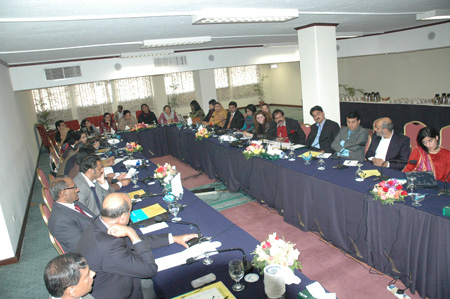