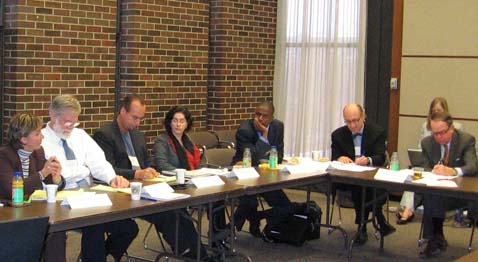 Local government in the United States will need to adapt to meet the challenges of regionalism, the global economy, climate change and homeland security. This was the conclusion stressed by academics and government officials meeting in Chicago for a recent one-day conference on local government and metropolitan regions. The event was part of the Forum’s Global Dialogue on Federalism, which is currently examining the issues of local government in 12 federal countries around the world.

During the morning session, 20 participants considered the context of how federal structures and different orders of government respond to local challenges such as Hurricane Katrina, development of infrastructure, sharing of revenue and delivery of government services. During the afternoon, they were joined by an additional 30 participants including many elected officials from the Greater Chicago area for a more in-depth discussion of the challenges of governance and politics at the local level.

The roundtable was held on January 18, 2007 at the University of Illinois at Chicago, near the site of Jane Adams’s historic Hull House, one of the first settlement houses for urban poor and immigrants to the U.S.

Future Global Dialogue roundtables on the same theme will be held in Madrid, Spain, on Jan. 26, in Berlin, Germany on Feb. 2, in Capetown, South Africa on Feb. 9 and in Sydney, Australia, on Feb. 9. Other roundtables were held in 2006 in London, Canada, in Jos, Nigeria, in Rio de Janeiro, Brazil, in New Delhi, India, and in Bern, Switzerland. Additional roundtables are planned for Austria and Mexico.

Later in 2007, an international roundtable will be held, followed by the publication of a book. The local government theme is the Forum’s sixth in the Global Dialogue series.