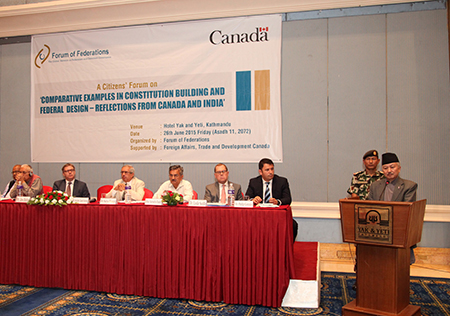 The Forum of Federations has begun its program in support of Nepal’s move towards federal democratic governance with two major events in Biratnagar and Kathmandu. 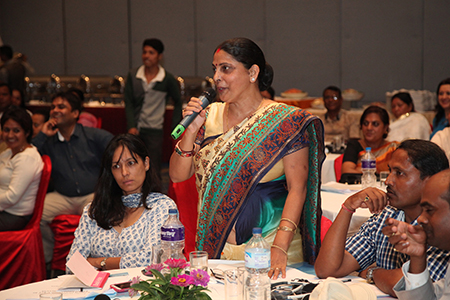 The Forum program focuses on the experiences of states transitioning towards federal and devolved systems of governance, in support of Nepal’s own transition and consolidating its democracy. Programming will also provide technical advice and training as well as a public outreach campaigns.

Kathmandu Citizens Forum
A Citizens’ Forum on "Comparative Examples in Federal Design” officially launched the Forum of Federations program on Consolidating Democratic Transition in Nepal; the launch was held on 26 June, 2015 in Kathmandu, Nepal.

The Forum was honoured to welcome the Right Hon. Subas Chandra Nembang, Chairman, Constituent Assembly of Nepal as the Chief Guest of the event; he spoke of the important work of the Constituent Assembly in drafting the much anticipated Constitution and his appreciation of the support of the Forum of Federations and the Government of Canada as Nepal moved ever closer towards concluding its constitution.
Mr. Jess Dutton, Canada’s ChargÃ© d’Affaires for Nepal was the special guest at the event, he shared Canadian perspectives on federal design and indicated the Government of Canada’s support for democratisation in Nepal and the Forum’s work to aid that important goal.

The Citizens Forum brought together leaders from different political parties, lawyers, academics, journalists, community activists and civil society to participate in this daylong event. The event uniquely offered participants the ability to discuss with international experts and prominent Nepal leaders issues around the constitutional drafting process during several panel discussion and debate periods.

Presentations brought comparative experiences to bear on central issues of inclusive governance, democratic federal practice and the evolution of constitutions in both Canada and India. Nepal political leaders offered insight into the ongoing constitutional drafting process.
Phillip Gonzalez, the Forum’s Director in Nepal, was the moderator of the event, Dr. Surya Dhungel, Advisor of Forum of Federations provided his insight into the process to date in Nepal. Dr. Leslie Seidle, presented on â€˜Federalism as an Evolving Contract: The Canadian Case’ and Dr. Ash Narayan Roy on â€˜Unity through Diversity: Devolved Governance Key to Federalism’s Success’.

The launch was extremely well attended and attracted well over 100 people to this special event.

The Forum’s program Supporting Democratic Transition in Nepal is graciously supported by Canada’s Department of Foreign Affairs, Trade and Development.