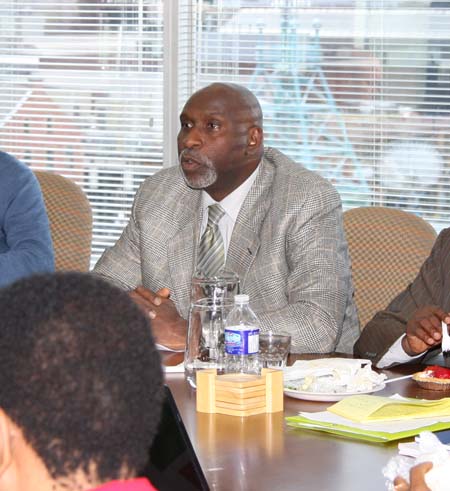 Mr. Charles Ayako Nyachae, Chairperson of the Commission for the Implementation of the Constitution of the Republic of Kenya, speaking at the Forum of Federations during a Lunch-and-Learn presentation.

The Forum of Federations organized a "Lunch and Learn” session on April 3, 2012 at the Forum office in Ottawa to discuss the expectations and challenges regarding the implementation of the new Kenyan Constitution which was adopted in 2010 and which will become fully functional following the general elections in 2013.

Mr. Charles Nyachae, Chairperson of the Commission for the Implementation of the Constitution (CIC) of the Republic of Kenya explained the various aspects of the transitional phase with the help of Prof. Peter Wayande, Mr. Philemon Mwaisaka, and Dr. Florence Omosa who are also Commissioners.

According to Mr. Nyachae, the new constitution is a "radical” document that will play a pivotal role in the devolution of power. He delved on the upcoming elections and the role of the constitutional provisions to ensure that Kenya could embark on a path of governance. The role of the judiciary came in for special mention given that it will play an important role in arbitrating among the parties should there be a dispute. He stated that the ineffectiveness of the judiciary was a principal reason for the instability the country faced before the promulgation of the new constitution. It is imperative that for political stability, Kenyans allow the judiciary to interpret and enforce the constitutional provisions in an autonomous manner. Provisions for reforming the police and checking impunity will also further the success of the upcoming elections. It is essential that governments at all levels be able to "hit the ground running” once the elections results are declared.

He stressed that people had high expectations from the new constitution and believed their lives would change significantly under the new system. They were hopeful that the new system would be corruption free and that the devolved system would deliver services efficiently. Since unmet expectations can trigger unrest, the CIC has asked the political class to start thinking proactively on the deliverables. There still existed a lack of understanding among many about the provisions of the new constitution and for this reason, civic education was the need of the hour. He lauded the media for raising awareness among the public about the political changes. It was acknowledged that the Kenyan public and civil society organizations were the staunchest supporters of the change. Ending on a positive note, Mr. Nyachae stated that the CIC was making notable progress in implementing the constitutional provisions.

The presentation took place at the Forum’s Board Room on Tuesday, April 3, 2012.