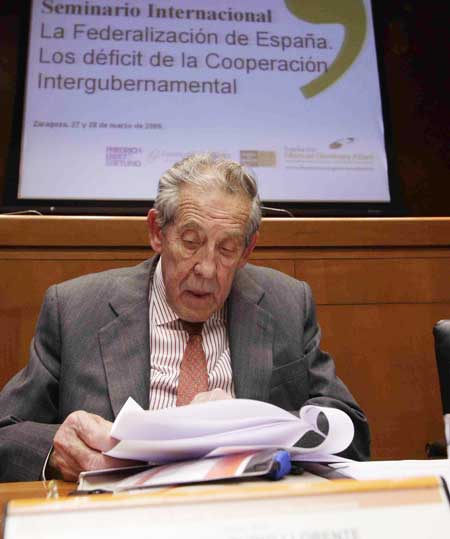 Francisco Rubio Llorente, President of the State Council of Spain, prepares to present at a conference on the federalization of Spain.

The Forum of Federations’ president and its co-founder recently joined federalism experts from Canada, Germany and Switzerland in Zaragoza recently to share their knowledge of intergovernmental relations with their Spanish counterparts.

The conference on the federalization of Spain was co-organized by the Forum with the Gimenez Abad and Friedrich-Ebert Foundations.

Spain does not consider itself a federation as such, but it shares many features of federal states.

But unlike some established federations, Spain lacks institutions and mechanisms for promoting cooperation between what is called its "autonomous communities,” which are the equivalent of states or provinces in federal countries.

Forum President George Anderson gave an address titled the Political Relevance of Federalism in the 21 Century.

Mr. Anderson suggested that "federalism and federal experiences will be even more relevant in the Twentieth-First century than they have been in the past” due to the spread of democracy around the world.

"The Twenty-First Century may well see significant developments in terms of sovereign states coming together,” Mr. Anderson said. "This could include the deepening of regional arrangements that already exist or the invention of new ones.”

Mr. Anderson observed that "some of these regional arrangements, including here in Europe, may evolve in a federal direction and even become recognized as federations.”

And the professor answered the question, noting that Spain "has come to exhibit the basic structures and processes typical of federations.”

The conference took place on Mar. 27 28, 2009 at the AljaferÃ­a Palace in Zaragoza. In the future, a book containing conference papers and case studies will be produced.

Read George Anderson’s presentation on Federalism in the 21st Century

View photos from the event: