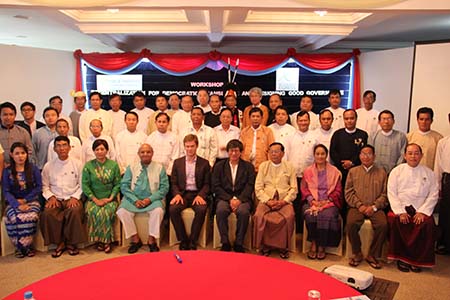 Members of the training session held in Burma in Aug 2013.

In the past two years, the government elected in Burma in November 2010 has initiated a democratic reform process that most observers would not have expected. In this period, Aung San Suu Kyi and several members of her National League for Democracy (NLD) Party have been elected to parliament and there has been an emergence of ethnic parliamentarians who have the potential to create new dynamics in Burmese politics. Notwithstanding this positive step, many political parties in Burma, including the NLD, have limited abilities to identify or effectively address issues important to their constituents.

Burma’s population is comprised of over 135 distinct ethnic groups, at least 12 of which have taken up arms against the central government since Burma won its independence in 1948. Within this context, federalism (the devolution of power from the national government to the states, regions and zones which make up Burma) is seen by many local stakeholders, including members of the governing Union Solidarity and Development Party (USDP), as a viable solution for maintaining unity, while allowing for diversity in Burma. However, there is a lack of knowledge and widespread misperception of democracy and federalism.

As part of its program "Consolidating Burma’s Move Towards Democracy” the Forum recently conducted two extensive 3 day training sessions in Burma. The first training was provided to 37 members of the national (federal) level bicameral legislature of Burma, the Pyidaungsu Hluttaw, which is made up of two houses: the Amyotha Hluttaw ("House of Nationalities”), a 224-seat upper house as well as the Pyithu Hluttaw, a 440-seat lower house (House of Representatives). Parliamentarians at the training represented the ruling party (USDP) as well as the opposition party NLD and several members of ethnic parties and came from both houses of the legislature.

The second training was delivered to 40 senior level government officials from union/federal departments. Both trainings were organized in cooperation with the Forum’s local partner organization, Myanmar EGRESS (http://www.myanmaregress.org/), and were facilitated by Dr. Sandeep Shastri (Jain University, Bangalore, India), Dr. Francis Loh (Prof. emeritus, Penang University, Malaysia) and Felix KnÃ¼pling, Head of Programs at the Forum of Federations. The training sessions, titled "Workshop on Decentralisation for Democratic Transition and Designing Good Governance in New Myanmar”, were held between August 10-16, 2013, in Naw Pyi Daw, Burma’s capital city. The Forum also held an outreach event for 60 representatives of civil society organizations in Yangon on August 8, 2013 in cooperation with Myanmar EGRESS.

The Forum’s training focuses on:

a. Helping understand and contextualize political and economic developments in Burma and consolidating the process of nation building;

b. Ushering in a dialogue on international experiences and best practices for decentralized governance and federalism;

c. Furthering a process of mutual learning by means of exchanging ideas on strategies for and experiences of decentralization, devolution and participation in both established democracies and new democracies;

d. linking the same to the current decentralization processes being initiated in Burma;

Participants during the trainings raised questions on issues such as:

â€¢ How can decentralization/ federalism solutions for Burma be identified?

â€¢ What is "genuine” federalism?

â€¢ How to implement decentralization and federalism?

â€¢ How can the interests of ethnic groups be protected in federal systems? What is the impact of federalism on diversity

â€¢ What are the experiences of other federal countries?

â€¢ What are the important institutions in federal systems?

â€¢ The role of constitutions in federal systems?

â€¢ What is the link between democracy, democratization and federalism

â€¢ How does resource sharing happen in federal systems?

The Forum’s training and outreach program in Burma aims to improve the capacity of local stakeholders to make informed choices about Burma’s future governance structure. The Forum will also conduct "Training of Trainers” (ToT) courses to enhance local training capacity on issues related to federal governance. It also works with the International Republican Institute to provide training to political parties for outreach campaigns.

The Forum’s training program is Burma is sponsored through the Global Peace and Security Fund, Department of Foreign Affairs, Trade and Development, Government of Canada.