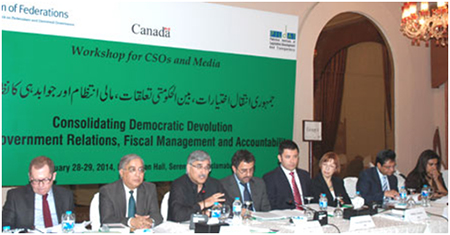 The series of nine workshops involved presentations from local and international experts.

On January 28, 2014 the Forum began a series of nine workshops aimed at the consolidation of democratic devolution Pakistan.

The first two day workshop in Islamabad was targeted at civil society and media representatives drawn from across Pakistan. The workshops seek to provide Pakistani and international comparison on the role and function of intergovernmental relations, fiscal management, accountability and transparency within the context of the devolution of powers embodied in the 18th Constitutional Amendment. These are vital to the effective functioning of all federal systems, including Pakistan’s own federation.

The Forum worked with its local partner, the Pakistan Institute of Legislative Development PILDAT, to bring these workshops to fruition.

The first workshop involved presentations from local and international experts as well as group work sessions where participants were asked amongst other questions to examine some of the impediments present to the devolution of power and how to overcome these. The workshop was attended by over forty youth, media and civil society leaders drawn from across Pakistan.

PILDAT President Ahmded Bilal Mehboob and Phillip Gonzalez, Forum’s program manager for Pakistan, opened the workshop. The Honourable Sardar Awais Ahmed Khan Leghari, Member of the National Assembly and Chairman of the National Assembly Standing Committee on Foreign Affairs made the opening address. He stressed that political will was required for consolidating democratic devolution and the gains achieved by the historic 18th Amendment to the Constitution. He thanked the Forum and PILDAT for providing an opportunity to learn from regional and international experiences of federalism. 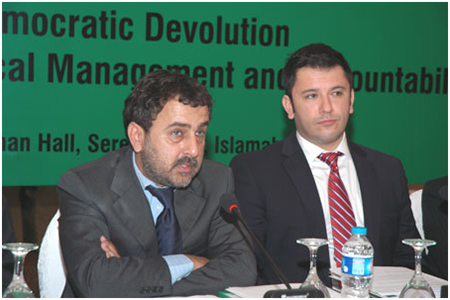 Mr. Ahmad M. Zahid, Former Federal Secretary of the Inter Provincial Coordination (IPC), presented on Intergovernmental Relations in Pakistan Evolution and Potential with Relation to 18th Amendment opened the discussion on the challenges of the implementation of the devolution process.

Each session concluded with an in depth question and answer period. In the final session of the first day small discussion groups were created, participants were asked to devise recommendations for the implementation of the 18th Amendment and functionality of the Inter Provincial Coordination and Council of Common Interests. 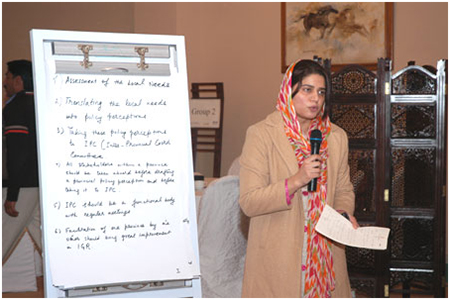 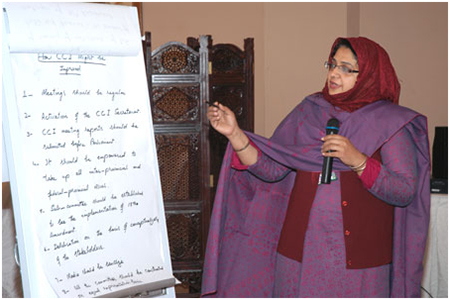 On the second day, Dr. Ikram Ul Haq, Advocate of the Supreme Court and International Tax Counsel, presented on Pakistan Fiscal Management and Accountability. He indicated that there were certainly challenges in the fiscal arena, such as fiscal deficit increasing and resulting debt burden on the rise; uncontrolled expenses; a failure of adequate fiscal responsibility; and low tax to GDP ratio. He added that in order to consolidate the gains of devolution, provinces have to be aware of their taxation rights. Fiscal empowerment of provinces in real sense is needed by giving them the right to tax goods and services within their boundaries. However, he added, provinces, in turn, must empower elected local governments.

Dr. Galina Kurlyandskaya, Center for Fiscal Policy, spoke on Fiscal Federalism and Accountability in Federal System. She presented international examples of decentralization, both from established and developing countries. She highlighted that for sub-national governments to be really accountable for their performance and to respond to citizens’ opinion, they need to enjoy fiscal powers relating to revenues and spending. Dr. Kurlyandskaya further suggested that government must be accountable for allocation of intergovernmental transfers and the transfer allocation has to be public, transparent, unbiased and fair. 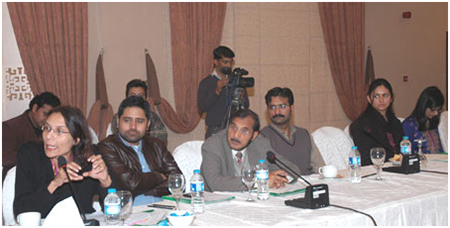 The project on the Consolidation of Democratic Devolution and Strengthening Stability in Pakistan is funded by the Government of Canada.