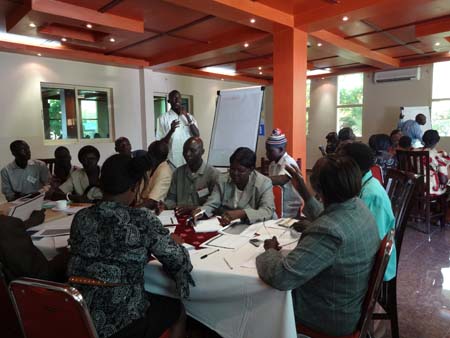 During the workshop held in Juba, South Sudan

The Forum of Federations recently co-organized a three-day workshop on Decentralization and Constitutionalism in South Sudan in Juba over 12-14 February, 2013. The event was co-hosted by the South Sudanese Network for Democracy and Elections (SSuNDE), a network of more than 75 civil society organizations from across South Sudan. Over 100 people participated, including parliamentarians from all ten states and the national legislature, representatives of political parties, national and state government officials, members of the National Constitutional Review Commission, academia, media, religious institutions and civil society.

The three days were organized around topics that are relevant to the ongoing process of constitutional review. The Republic of South Sudan became the world’s newest country on July 9th, 2011. At that time the country adopted a Transitional Constitution which sets out a process of review, public consultations and adoption of a Permanent Constitution by July 2015. The objective of this project is to help deepen and broaden the participation of South Sudanese around federal-decentralized governance options for the permanent constitution. It is widely accepted that this is one of the most important and contentious dimensions to the constitutional debates in South Sudan but where there are major gaps of clarity or knowledge about the options and their implications.

In addition to the South Sudanese participation the Forum fielded experts from Argentina (Juan Antonio Zapata), Australia/South Africa (Bertus DeVilliers), Canada (Shawn Houlihan), India (Sandeep Shastri) and South Africa (Jaap De Visser). The workshop was organized around carefully identified key areas of concern: (i) basic concepts, objectives and risks of decentralization, (ii) power sharing, (iii) intergovernmental relations, and (iv) the principles of fiscal decentralization and managing oil dependency (South Sudan government revenues derive 98% from oil). In addition to learning within the workshop itself, the participants and international facilitators worked on the design of a series of Discussion Papers to be produced by the Forum for circulation in South Sudan, as well as a series of pictorials and talking points designed for use in grassroots dialogue by SSuNDE and the other participants and their respective organizations to generate more debate and inputs into the constitutional development process.

During the closing ceremony, Mr. Ateng Wek, a member of the National Constitution Review Commission (NCRC), said that "…the knowledge attained from this workshop has raised the souls of the people of South Sudan because decentralization will cement their aspirations… »

The program is funded by Global Peace and Security Fund of the Stabilization and Reconstruction Task Force, Canada’s Department of Foreign Affairs and International Trade.