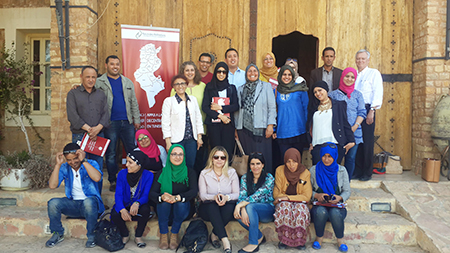 Members of the training workshop held in Tataouine, Tunisian

The Forum of Federations, under the auspices of the Tunisian Ministry of Women, Family and Children, held a training workshop in Tataouine which aimed to sensitize civil society in the region to decentralization and the role it can play in the implementation of this process. This activity was undertaken as part of the Forum’s “Support for decentralization in Tunisia Phase III” project funded by the Government of Canada.
The Tataouine workshop, which took place from 27th to 29th April, is the first in a series of five regional workshops scheduled to be held throughout 2015. The event brought together local and international decentralization and gender experts, active members of civil society from the region, and representatives of the Ministry of Women, Family and Children.

Forum Senior Advisor Mr. Andre Juneau gave a presentation on decentralization utilizing an international benchmark, with particular emphasis on the Canadian experience. Makram Montacer provided an overview of the situation in Tunisia and highlighted the issues that remain to be resolved both from a legal and administrative perspective. The role of civil society in the process of effective decentralization is undeniable.

As Mr. Montacer emphasized, decentralization involves the delegation of powers to elected local authorities, local governance, and a necessary renewal of spatial planning policies. In Tunisia decentralization has constitutional validity through Chapter 7, Articles 131 to 142 of the Constitution. The purpose of these articles is the promotion of a participatory institutional local democracy and decentralized political and fiscal governance. This raises several challenges: territorial division; the definition of powers of local authorities; local government financing and taxation, etc.

Day 2 of the workshop explored the theme of gender in decentralization. Despite the important role played by Tunisian women in socio-economic development, much remains to be done to increase visibility and understanding of the value of their contribution in all spheres of activity. Ms. Leila Haouaoui explained that decentralization offers women more access points for political participation than a highly centralized system. She also stressed that the participation of women is an important element of growth and economic development. Ms. Salwa Hamrouni revisited the constitution with a "gender lens”, explaining the articles of the constitution in which parity is explicit and where the role of civil society in the introduction of the decentralization process is outlined. National commitments to achieving gender equality are undertaken by the central government through national plans for the promotion of women. However, attaining these gender equality commitments requires the implementation at local level of appropriate mechanisms and policies, stressed Ms. Haouaoui.

In this context the participants stressed the importance of civil society in the analysis of local conditions, dissemination of information, and maintenance of transparency and the need to connect citizens, civil society, and local authorities to create public spheres for dialogue and exchange. The participants, working in groups, concluded that decentralization is a “consciousness” to be developed and that the real problem is: How can this culture be fostered?

The dialogue enabled the various participants to deepen both their knowledge of decentralization and awareness of the importance of gender in this process while stressing the significance of national specificities in Tunisia’s decentralization.

At the conclusion of the seminar the participants expressed their desire to continue to engage in further decentralization outreach and training programs organized by the Forum of Federations.