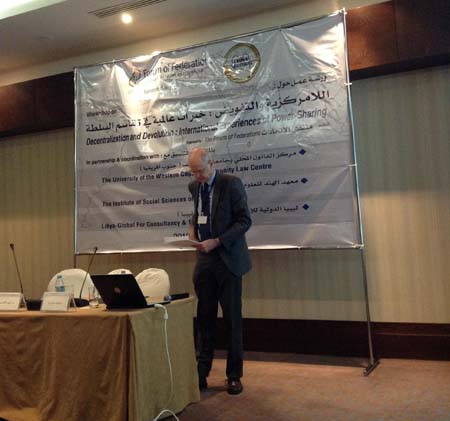 The Forum of Federations, in partnership with Tripoli University and Libya Global Consultancy and Training, held three workshops on decentralized and devolved governance in Libya, from December 9-13, 2012.

All sessions took place in Tripoli, and were delivered to three separate audiences. The first session involved participants from political parties and elected bodies, the second was targeted at civil servants and public officials, and the third session welcomed participation from nongovernmental organizations, academia and civil society. In total, there were 90 participants at the three sessions. Nico Steytler, Director, Community Law Centre at the University of the Western Cape, South Africa, led the sessions, and was supported by David Parks, Senior Advisor, Governance, at the Forum of Federations.

The objective of the workshops was to enhance the Libyan practitioners’ understanding of the applicability of various governance models, including decentralized state structures, to the constitutional framework. The sessions addressed issues of constitutional design, intergovernmental institutions, and governance mechanisms to create unity through diversity.

Over half of the participants came from outside of the capital city of Tripoli, with strong representation from the cities of Misrata, Zintan, Sebha and Ghat. These included practitioners from regional offices of the national government, as well as officials from local councils in these cities. The third session, directed at civil society and the nongovernmental sector, saw the participation of organizations working on gender, youth and transparency issues.

The December 2012 series of training sessions will be followed by a second series, scheduled to take place in February 2013.