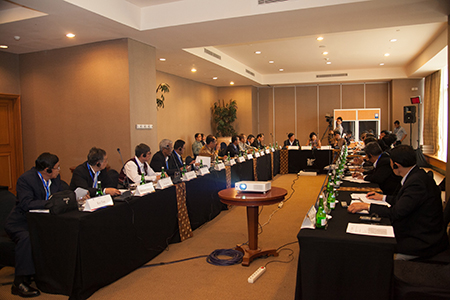 Forum of Federations organised a two day high level event which was held February 17-18, 2014 in Jakarta.

As part of its project "Consolidating Burma’s Move towards Democracy”, funded by the Government of Canada, the Forum of Federations recently organised a two day high level "Policy Dialogue on Civil Military Relations in a Process of Democratic Transition”. 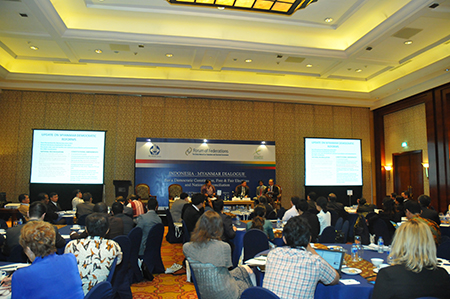 The objective was to learn from Indonesia’s experience of more than 15 years of democratic reform and decentralization. Participants were given the opportunity to explore how Burma/Myanmar could benefit from Indonesia’s lessons.

There are many parallels between the two countries: In the early days of the Indonesian reform process referred to as Reformasi , negotiating the exit of the military from politics was probably the single most divisive issue in a hugely complex agenda of reforms. This included amending the constitution, promoting national reconciliation in the province of Aceh where armed conflict had raged for two decades, and making decentralization effective to address the diverse political and economic needs of the Indonesian people. Along with the challenge of making ethnic and religious pluralism an integral part of the foundations of Indonesian democracy, those are all issues that Burma/Myanmar is dealing with today.

The policy dialogue was held February 17-18, 2014 in Jakarta in cooperation with Myanmar EGRESS (Yangon) and The Habibie Centre (Jakarta), two of the Forum’s partner organisations. 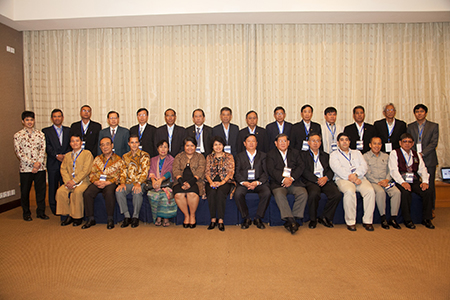 It was the first time in history that an official delegation attending such a learning event from Burma/Myanmar included government representatives as well as representatives of Ethnic Armed Organizations (EAOs). The delegation from Burma was headed by U Aung Thein, Deputy Minister in the President’s Office, and included senior Members of Parliament as well as Political Party leaders. U Kwe Htoo Win, Secretary General of Karen National Union, was the senior EAO representative. 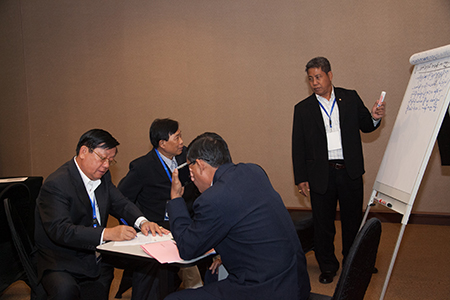 The activity consisted of a closed roundtable discussion involving 15 delegates from Burma/Myanmar as well as 7 Indonesian resource persons. On the afternoon of the second day, participants discussed some of the key findings in a public Forum. 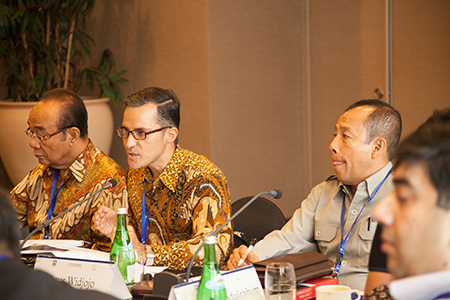 Academic lead on the policy dialogue was taken by Dr. Indraneel Datta, who is a governance expert. Having worked, amongst others, for the UN and the EU in Indonesia, Dr. Datta has been involved in the Aceh peace process and the East Timor Act of Self-Determination. 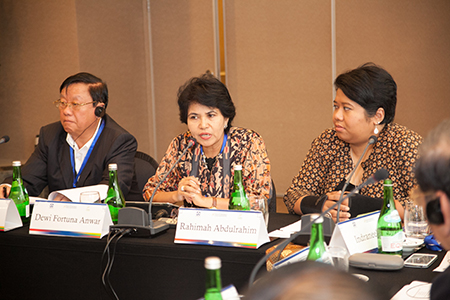 The closed roundtable discussion was led by key decision makers involved in the Indonesian reform process, among them:

– Lieutenant General (Retired) Agus Widjojo, former head of the Armed Forces and National Police parliamentary group in national parliament, 1999-2003. He was a leading participant in the deliberations during Indonesia’s transition to democracy that culminated with the Armed Forces’ withdrawal from formal politics in 2003.

– Mr. Hamid Awaludin. Former Minister of Law and Human Rights, and the Indonesian government’s chief negotiator in the Aceh Peace Process that culminated with the Helsinki Agreement in 2005.

– Dr Kusnanto Anggoro who was actively involved in reforming the security sector in Indonesia;

– Mr. Nur Djuli – Senior Negotiator of the Free Aceh Movement (GAM) who participated in the talks that culminated in the Helsinki Agreement between the Government of Indonesia and GAM. 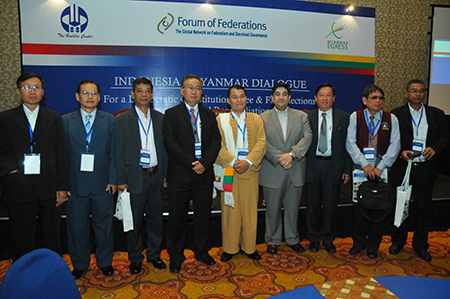 The roundtable was composed of 5 sessions on key challenges faced by democratic Indonesia in reforming its civil-military relations. The lessons learned addressed four dominant themes in the current political reforms of Myanmar:

(1) Create a democratic constitution and conduct free and fair elections

(2) Promote Peace and Reconciliation in the nation

(3) Formulate a legal framework that defines the â€˜new rules of the game’ regarding duties and responsibilities of civilians and military in a democracy.

The discussions were structured so that they could directly feed into two ongoing negotiation processes that are key to the progress of democratic reforms in Myanmar over the coming 18 months: Constitutional reform and reaching a peace deal (nationwide ceasefire) between the government and EAOs. 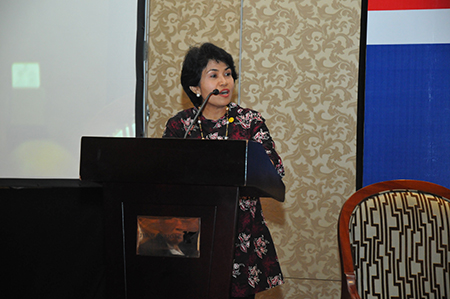 The Myanmar delegates focused on three main issues of constitutional reform. First, the process by which the constitution was reformed in general, and in particular the amount of time it actually took. Up from an initial estimate of 15 working days, the constitutional committee ultimately took over 3 years to be drafted and endorsed by the national assembly. The use of voting to approve draft amendments in the constitutional committee was particularly divisive. A member of the upper house of Myanmar’s national parliament advocated its systematic use while the former chairman of the same committee that oversaw Indonesia’s draft amendments was adamant that the key to getting the amendments “right” was to avoid a tyranny of the majority situation and forego voting, even if it meant protracted negotiations to reach a consensus. 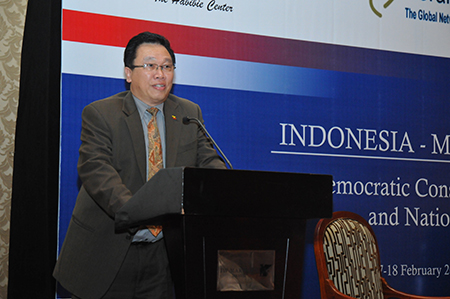 Secondly, the power sharing arrangement that was worked out between the central government and regional governments were highlighted. The delegates noted the shared concerns by both the Myanmar and the Indonesian government about wanting to ensure that devolution would not become hijacked by secessionist groups, and were interested in the formula whereby the Indonesian constitution enshrines fundamental principles of relations between the central and sub-national governments, and subsequently allows room for the formulation of separate agreements in law. Some delegates appeared to find this arrangement to merit further scrutiny because it afforded “flexibility” in dealing with the diversity of demands by regions and ethnic groups. The wide-ranging powers of Aceh’s Special Autonomy being a case in point that was discussed in detail during the dialogues. 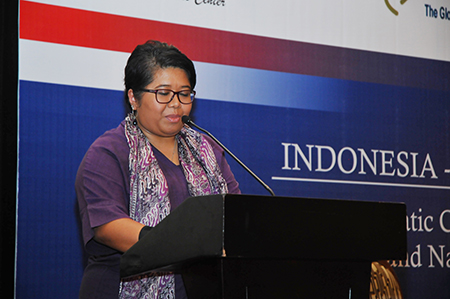 The third constitutional issue under close scrutiny by the participants was the reduction of the formal representation of the Indonesian Armed Forces in national and sub-national parliaments in general, and in particular the fact that it was conducted gradually over several years. Although this phasing out process was not strictly part of constitutional reform because it was not a constitutional privilege, it was addressed within the broader negotiations between civilians and the military about ensuring that every Member of Parliament was elected. The delegates were particularly interested in the pattern of reductions. In other words the number of officers that withdrew from parliament each time a cut was enacted, and the extent to which the military were driving this process, or whether they were â€˜pushed out’ by civilians.

From the vantage point of Myanmar’s current reforms, probably the greatest contribution of the event was to demonstrate how Indonesia’s democratization went against much of the conventional wisdom at the time about what represented â€˜best democratic practice’, for example:
– the decision to amend the constitution that had underpinned authoritarian rule rather than replace it by an entirely new one.

– The protracted negotiations that followed, ultimately requiring 4 years for the constitution to be amended.

– Another remarkable feature was the decision by the civilians to allow the Armed Forces to determine the schedule of their own withdrawal from formal politics.

In hindsight, such features of Indonesia’s democratization that were reviled as â€˜vices’ are nowadays widely acknowledged as "virtues”. Fifteen years since the fall of authoritarian rule, it is one of Southeast Asia’s most vibrant democracies.

Indonesia’s very peculiar process of political reforms provides compelling evidence that each country ultimately needs to find its unique solutions to its unique challenges while keeping with fundamental democratic principles.

Participants thanked the organisers to provide a very rare opportunity for Government and Ethnic Armed Organizations from Burma to exchange views on sensitive issues on neutral territory. A report on the public event can be found in The Jakarta Post http://www.thejakartapost.com/news/2014/02/19/former-rebel-tells-myanmar-look-democracy-indonesia.html , accessed on February 19, 2014.

The project "Consolidating Burma’s Move towards Democracy” is funded by the Department of Foreign Affairs, Trade and Development, Government of Canada.