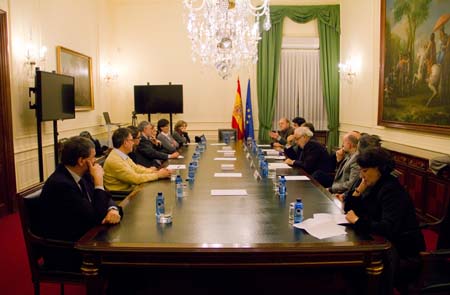 On the 8 March the Centro de Estudios PolÃ­ticos y Constitucionales (CEPC) of Madrid, Spain hosted the launch of the seventh book in the Global dialogue series on Diversity and Unity in federal countries, edited by Professors Luis Moreno from the Consejo Superior de Investigaciones Cientificas (CSIC) and CÃ©sar Colino of the Universidad Nacional de EducaciÃ³n a Distancia (UNED). The event was chaired by CEPC Director, Prof. Paloma Biglin and Dr Rupak Chattopadhyay, Vice President of the Forum of Federations; also in attendance was Professor Luis Delgado, Assistant Director of Publications and Documentation at CEPC.

The book is the result of more than three years of in depth research and analyzes into the cases of 12 countries (Australia, Belgium, Brazil, Canada, Spain, United States, Ethiopia, India, Nigeria, Russia and Switzerland). The publication brought together over 250 academics and experts from around the world who participated in roundtable discussions in each of the 12 countries examined in this book. Prof. Juan JosÃ© SolozÃ¡bal described the comparative nature of the work, which compared the institutional and policy responses from these federal countries regarding “old” and “new” diversity. This study underscored the principles of self-government and shared governance that make up the federal idea, which seeks to reconcile unity and diversity by means of political pact.