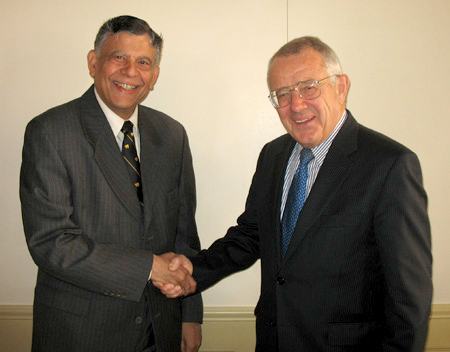 The Forum of Federations recently held its semi-annual board meeting, where Dr. Vijay Kelkar of India presided as the Forum’s new chair, replacing the retiring Dr. Arnold Koller of Switzerland.

The Board approved the Forum’s budget and work plan for 2010 11, a plan that sets out the organization’s governance and development assistance work, and the related learning programs it delivers in more than 20 countries that are either federal or which have federal attributes. It also produces books and learning materials in a range of languages in support of those programs.Â

The meetings were held Feb. 26 and 27 in Switzerland, to dovetail with other Forum activities in Europe.

During that time, the Forum’s outgoing chair, Dr. Arnold Koller, was honoured at a special dinner hosted by the Swiss Foreign Department and at an event in the Swiss canton of Solothurn. Dr. Koller was president of the Swiss Confederation in 1990 and 1997. In 2000 he was named to the board of the Forum and in February 2005 he was appointed Chairman. He was recently named a Fellow of the Forum, the organization’s highest honour.

Dr Kelkar, a renowned economist, was the recent Chairman of India’s powerful Finance Commission. He has also served as India’s Finance Secretary, Advisor to the Minister of Finance, and Secretary in the Ministry of Petroleum and Natural Gas.
http://www.forumfed.org/en/events/event.php?id=518

As the head of India’s Finance Commission, Dr. Kelkar handed in his last report to the President of India on December 31, 2009, before officially taking on his role as chair of the Forum’s board of directors http://www.forumfed.org/en/about/board.php.