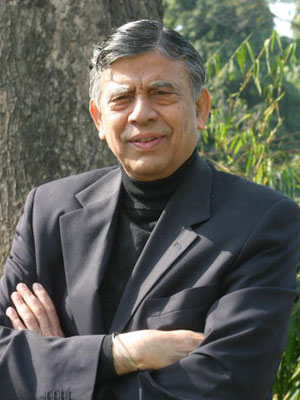 Dr. Vijay Kelkar of India, new Chairman of the board.

Dr. Vijay Kelkar of India has been elected Chairman of the board of the Forum of Federations. Dr. Kelkar is the current chair of India’s powerful Finance Commission. His term as Forum chair begins January 1, 2010.

Dr. Kelkar replaces Dr. Arnold Koller, of Switzerland, who held the post at the Forum since 2005. The Forum’s board has named Dr. Koller a Fellow of the Forum, the organization’s highest honour.

Internationally, Dr. Kelkar was Executive Director at the International Monetary Fund for India, Sri Lanka, Bangladesh and Bhutan from 1999-2002; and Director & Coordinator, International Trade Division of the United Nations Conference on Trade and Development, Geneva, Switzerland, 1991-1994.

At the Forum’s board of directors meeting of October 7, 2009, three new members joined the board: Mukul Joshi of India; Vicente Carlos y PlÃ¡ Trevas of Brazil; and Alexander Alvaro of Germany. Mr. Joshi is Secretary of India’s Inter-State Council Secretariat. Mr. Trevas is an adviser to the Caixa EconÃ´mica Federal, one of Brazil’s key federal banks. Mr. Alvaro is a member of the European Parliament, and holds the Young Professional seat on the board.