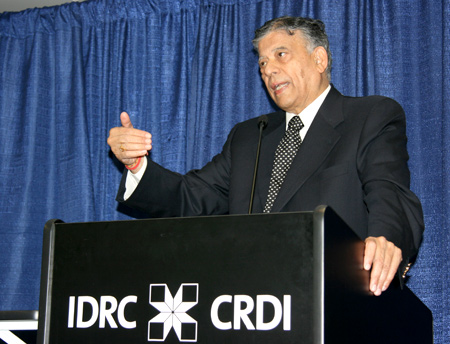 The new chairman of the Forum’s board of directors, Dr. Vijay Kelkar, spoke in Ottawa on the topic of the Recent Evolution of Indian Federalism.

The event was held at the International Development Research Centre (IDRC) and co-organized by the IDRC and the Forum on March 1, 2010.

Dr Kelkar, a renowned economist, was the recent Chairman of India’s powerful Finance Commission. He has also served as India’s Finance Secretary, Advisor to the Minister of Finance, and Secretary in the Ministry of Petroleum and Natural Gas.
http://www.forumfed.org/en/events/event.php?id=518

As the head of India’s Finance Commission, Dr. Kelkar handed in his last report to the President of India on December 31, 2009, before officially taking on his role as chair of the Forum’s board of directors http://www.forumfed.org/en/about/board.php.

David Malone, the president of the IDRC and a former Canadian high commissioner to India, introduced Dr. Kelkar, recalling that the new Forum chairman had last travelled to Canada with members of the Indian Finance Commission to learn the arrangements in Canada of how the federal government carries out fiscal transfers to its provinces.

While only six decades old, federalism in India faces many of the same challenges as its more-established Canadian and American federal counterparts. Equalization, off-shore resource revenues, the environment, and urbanization are leading issues confronting the world’s largest federation.

In his speech, Dr. Kelkar discussed the flexibility of India’s co-operative federalism, which he said has provided the country with strong national unity and economic progress, and has also enabled the country to adopt innovative solutions to the contemporary challenges posed by the country’s social and economic transformation.

"The federal system has served extremely well for India to promote our democracy, to strengthen the national unity and to achieve economic progress,” he noted.

Dr. Kelkar also praised the Canadian model of equalization payments. "In the Canadian constitution, there is a clear mandate for horizontal equalization,” he told about 50 attendees, including public servants, academics and international development experts.

He also said he is delighted to be taking on the chairmanship of the Forum of Federations, which he called "one of the great initiatives that Canada has taken to share its â€˜soft power’ with the international community so as to foster democracy and improve global governance.”
Download speech