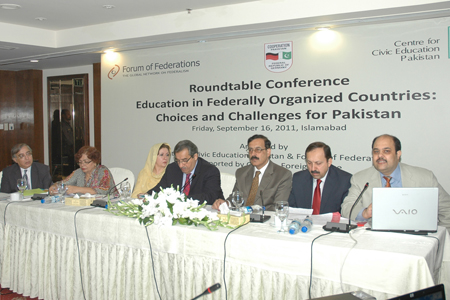 On 16th September, 2011, the Centre for Civic Education Pakistan and Forum of Federations arranged a roundtable conference titled "Education in Federally Organized Countries: Choices and Challenges for Pakistan. The Conference is a part of an ongoing project "Strengthening Federalism in Pakistan” the project is being run since October 2009 and is funded by the German Foreign office.

Objectives of the conference were to understand and review the state of education in the four provinces as the 18th amendment to the constitution last year has redefined the role of the provinces and the federal government in the education sector and granted the provinces complete autonomy in developing curriculum and syllabi, planning, development, policy-making and management of educational institutions.
This situation on one hand gives an exciting prospect to the provinces to make new advancements in education sector and develop improved curriculum according to the needs, priorities and ideas of their own regions and on the other hand this also adds to the responsibilities of the provinces to provide better education management and delivery to their citizens.
The roundtable was attended by Eminent educationalists, Education Secretaries, officials of Education Ministries, Chairmen Textbook Boards, Vice Chancellors of major universities from the four federating units and Islamabad, Research scholars, Senior Minister of Sindh Province Pir Mazharul Haq and Senator Mian Raza Rabbani one of the key authors of the 18th Constitutional Amendment.

Mr Zafarullah Khan, Executive Director of Centre for Civic Education, welcomed the participants and said that it was an exploratory session and a learning event to take stock of the education sector after the devolution and the idea behind it was to solicit suggestions and innovative solutions for improvements in this vital area.

Senator Raza Rabbani in his keynote address apprised the participants about the moves being made to roll back the devolution process by the "centrist mindset” which was opposed to devolution and provincial autonomy. He said that the 18th amendment was a constitutional reality and stressed that it should be implemented in letter and spirit. He said that the original 1973 Constitution envisaged a participatory federation, but provisions pertaining to provincial autonomy were misinterpreted and circumvented by the bureaucracy in collusion with the ruling political elite turning it into a quasi presidential system.
Expressing grief that today again moves are being made through the backdoor to keep the things in Islamabad which have been given to provinces. He said that with the abolishment of the concurrent the curriculum, syllabi, planning, policy, centers of excellence, standard of education, all of them stood devolved to the provinces and that their retention was unconstitutional.

Senior Minister of Sindh Pir Mazharul Haq chaired the first session in which education secretaries from the four provinces gave detailed presentations on the state of education in their respective provinces and shared the key challenges and opportunities after the 18th amendment.
In his address the minister said that in order to strengthen federalism in Pakistan people’s participation in the political process was a must. He said that Pakistan cannot survive without federalism. He said that Sindh Province had strong political will and has taken a lead and is taking full advantage of devolution under the 18th amendment.

Dr. Salman Humayun, Executive Director of Institute of Social and Policy Sciences (I-SAPS) in his presentation on "Education Sector: Challenges and Choices” said that the Education was both a technical and political issue, and the challenges and choices emerging in education sector in post 18th amendment had to be viewed in this context. He said that a number of federal and provincial laws would need amendments to comply with the 18th amendment and that will necessitate the changes in the rules of the business.
Farah Hamid, Secretary Higher Education, Khyber Pukhtoonkhwa, Mrs. Aftab Anayat, Additional Secretary Sindh, Dr. Allah Bakhsh Malik, Secretary Literacy Punjab, Akbar Hussain Durrani, Secretary Education Balochistan gave a note on what measures their respective provincial ministries had taken to tackle the challenges the devolution process, shed light on the state of the preparedness and shared recommendations on how the education sector can benefit from this devolution.