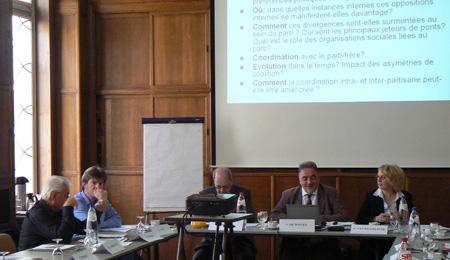 Roundtable participants discussing how to reach agreements and conflict resolutions at the federal, regional, community and municipal levels held in Brussels

Among the suggested reforms were holding the country’s regional and federal elections on the same day. Another idea was to create some electoral districts for members of parliament in which parties from all language groups would be on the ballot.

The official languages in Belgium are Flemish/Dutch, French and German.

The exchange of ideas was part of a roundtable discussion on the theme of Political Parties and Civil Society in Federal Countries.

The highlight of the discussion was the exchange among the key players from political parties and civil society organizations explaining how parties reach political agreements and resolve conflicts at the federal, regional, community and municipal levels.

The event was held on Oct. 30, 2009 in Brussels, with Prof. Lieven De Winter of the Catholic University of Louvain as co-ordinator.