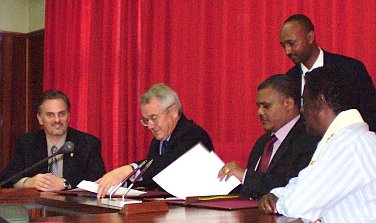 Dr. Koller and Mr. Shawn Houlihan, the Forum’s Director for Africa, also attended various events organized around Ethiopia’s first-ever celebration of the Day of Nations, Nationalities and Peoples. Ethiopia now joins Australia, Austria, Canada, India, Mexico, Nigeria and Switzerland as partner countries of the Forum. Germany has announced that it will become a partner in 2008.

The Day of Nations celebrations included a symposium on Ethiopia’s experience with federalism since it adopted a federal constitution in 1995, and with the challenges that lie ahead. The event was attended by representatives from more than 80 of Ethiopia’s nations, nationalities and peoples. In a speech to symposium participants, Dr. Koller recognized Ethiopia’s great diversity by paraphrasing a famous observation made by Napoleon Bonaparte about Switzerland in the 19th century, telling the guests that given the country’s great diversity, “it appears to me that Ethiopia will either be federal or not at all.”

Dr. Koller and Mr. Houlihan were also the Government of Ethiopia’s guests at the cultural and social events for the special Nations day, which included a photo exhibit illustrating the diversity of Ethiopia. During their mission to Ethiopia, the Forum officials met with President Girma Woldegiorgis, Prime Minister, Meles Zenawi, as well as ministers of the central government and representatives of regional states.

The Forum is developing programs for Ethiopia for 2007-2008 in conjunction with the House of Federation, the Ministry of Federal Affairs and Addis Ababa University. The programs will be based on broad consultations with stakeholders at all levels of government and civil society. The key issues to be addressed in the Forum’s Ethiopia programs will be fiscal federalism, intergovernmental relations and conflict management, as well as general knowledge-sharing and capacity-building.