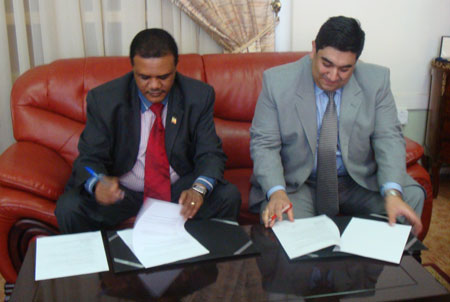 Degefe Bula, Ethiopia’s Speaker of the House of Federation, signing Partnership Agreement with Rupak Chattopadhyay, Vice-President of the Forum.

The Government of Ethiopia recently renewed its Partnership Agreement with the Forum of Federations at a signing ceremony in Addis Ababa.

Representing the Government of Ethiopia was Degefe Bula, the Speaker of the House of Federation. The Forum was represented by Rupak Chattopadhyay, its Vice-President of Governance Programs.

Mr. Bula outlined the important role the Forum has played in providing information and expertise on federal governance to the young federation of Ethiopia since the initial partnership agreement in 2006. He also expressed his appreciation that the Forum established its regional office for Africa and its country office in Addis Ababa in 2008.

In his remarks, Mr. Bula also outlined the progress that has been made in preparation for the 5th International Conference on Federalism which will be hosted by the Government of Ethiopia from December 2 4, 2010. The Forum is co-organizing the event.

The Secretary General of the House, Habtamu Nini, suggested that the Forum should expand its Ethiopia-based programs. In addition to a recently launched Forum program on Conflict and Federalism, financed by the German Government, he noted that in 2010 the House will be seeking collaboration with the Forum on revising its revenue-sharing formula.

Mr. Chattopadhyay also spoke at the ceremony. He expressed the Forum’s appreciation for the active role that Ethiopia has played in the Forum, most notably in hosting the upcoming International Conference on Federalism (ICF), as well as for the Government of Ethiopia’s programs with the Forum.

“It is extremely gratifying to hear from you, Mr. Speaker, that the Forum’s work has been relevant to practitioners like yourself, who are on the front line of establishing a new federation,” said Mr. Chattopadhyay.

The signing ceremony was held December 4.

Mr. Chattopadhyay also attended two days of meetings with the ICF Secretariat and the Management Committee for the ICF. The other members of the management committee are Solomon Tadesse, the Executive Director of the 5th ICF; Dr. Petra Zimmermann, Advisor to the House of Federation; Ambassador Tesfaye Habisso, the Senior Research Director for the ICF; and Shawn Houlihan, the Forum’s Africa Director.