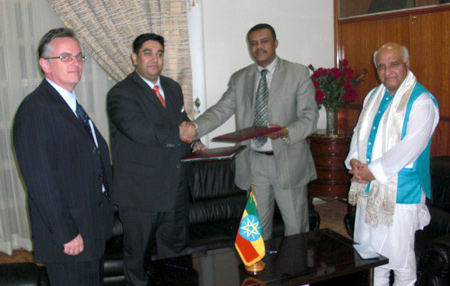 Rupak Chattopadhyay of the Forum, (centre left), exchanges a handshake with Mr. Degefe Bula, the Speaker of the House of Federation of Ethiopia. Shawn Houlihan of the Forum (far left) and Mr. Amitabha Pande (far right), the former head of India’s Inter-State Council, witness the signing ceremony.

The Government of Ethiopia and the Forum of Federations have signed a Memorandum of Understanding setting out their co-operation to organize the 5th International Conference on Federalism, scheduled to take place February 2010.

Mr. Degefe Bula, the Speaker of the House of Federation, signed the agreement in Addis Ababa on behalf of the Government f Ethiopia.

Mr. Bula said his Government is proud to host the conference and to work closely with the Forum and the other federations around the world to make the conference a success. The conference will provide the occasion for Ethiopians to learn from others and for the world to see the progress made by Ethiopia since the introduction of federalism in 1995.

Rupak Chattopadhyay, who signed on behalf of the Forum, said the Forum is delighted that Ethiopia is hosting the first international conference to be held on African soil, and expressed his appreciation for the quality of conference preparation achieved thus far by Mr. Bula and his colleagues.

Mr. Chattopadhyay, the Forum’s senior director of Global Programs, was accompanied by Mr. Amitabha Pande, the former Secretary of the Inter-State Council of India. Mr. Pande was the Government of India’s lead figure in the preparation of the 4th International Conference on Federalism which took place in New Delhi in November 2007. India’s Inter-State Council is a constitutional body for policy co-ordination, federal diversity management and consensus building between the central government and the states and among the states.

Mr. Pande was in Addis Ababa to share experiences and lessons learned from the 4th ICF with his Ethiopian counterparts. It was at the Delhi Conference that Prime Minister Meles Zenawi announced that Ethiopia would host the 5th international conference.

The conferences held about every three years — are landmark events for the world’s federalism practitioners. Several hundred participants attend the conferences, extensively from the host country but also from around the globe, including many heads of government, senior ministers, and leading subject-matter experts as well as young professionals. Previous conferences have been held in Canada (1999), Switzerland (2002) and Belgium (2005) and India (2007).

Also representing the Forum was Shawn Houlihan, the Forum’s Director for Africa. He has recently relocated to Addis Ababa to assist in the Conference organization, and to help the Forum forge stronger links with Ethiopia and other African countries.

The signing ceremony took place at the Office of the Speaker of the House of Federation in Addis Ababa on Oct. 17, 2008.