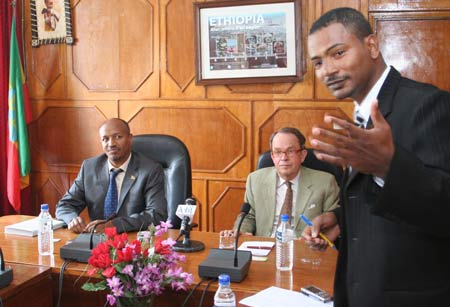 During his recent visit to Addis Ababa, Forum President George Anderson (centre), along with Ethiopia’s Minister of Federal Affairs, Dr. Shiferew Teklemariam (left), led a roundtable on the development of intergovernmental relations in Ethiopia’s young federation. At right is Ato Ewnetu B. Debela, Director for Intergovernmental Relations at the ministry.

During Mr. Anderson’s March 19-23 visit to Addis Ababa, he met with senior government officials and members of the international community. He also helped launch the Amharic translation of his book, Federalism: an Introduction, with Degefe Bula, the Speaker of the House of Federation the Ethiopian parliament’s second house.

The book was translated and printed through a partnership with the Canadian International Development Agency. A press run of 11,000 copies is being distributed throughout the country by the House of Federation, the Forum and others. The book will soon be available in other Ethiopian languages.

The Minister, Mr. Anderson, and Shawn Houlihan, the Forum’s Africa Director, also met to discuss ways the Forum and the Ministry could cooperate in helping to launch what the Minister called a "step-by-step” approach to enhancing the role of intergovernmental relations in Ethiopia, which became a federation in 1995.