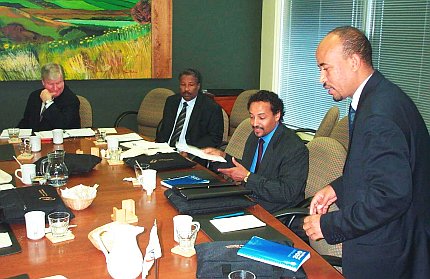 From February 6 to 7, 2006, a delegation of six Ethiopian political leaders and senior government officials from central and state governments met at the Forum of Federations office in Ottawa, Canada, to share experiences in federal systems in Ethiopia, Canada and internationally. The delegation included Siraj Fegessa, the Minister of Federal Affairs, and Melaku Fenta, the Minister of Revenue, as well as the Presidents of the Afar and Somali state governments and other officials. The program started with presentations by the Ethiopian delegates on their relatively recent experience with federalism and some of their key current challenges and capacity building needs. The Forum’s President, George Anderson, outlined the mission, structure and programs of the Forum and its growing work in emerging federations.

A major theme of interest to the delegation was the evolution of Canadian federalism, including how Canada has accommodated Quebec nationalism and Canada’s experience with constitutional reform. There was also a presentation and discussion on the seminal issue of fiscal federalism (including fiscal discipline and equalization) in Canada and other federations and a lively discussion on the important role of legislatures in the democratic development process in general and among federations in particular.

The delegation, accompanied by Forum Director, Africa Region, Shawn Houlihan, and Vice President for Governance, Valerie Raymond, also visited the Privy Council Office to explore issues around the machinery of intergovernmental affairs in Canada. The visit wrapped up with a brainstorming session about the potential future areas of capacity building collaboration between the Forum of Federations and Ethiopia government and civil society actors.