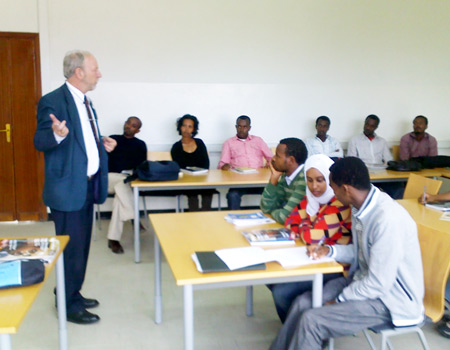 Rod Macdonell, the Forum’s Senior Director of Public Information and Education, speaks to students at Addis Ababa University about journalism in Ethiopia and Canada on December 26, 2010.

Two Forum staffers recently gave a presentation to 22 students at Addis Ababa University on the comparative legal environments for the practice of journalism in Ethiopia and Canada.

The students are doing their Master’s studies in journalism.

The students were told that it is essential for them to understand the Constitution of Ethiopia sufficiently enough to be aware of their legal rights and responsibilities when they take up the practice of journalism.

Rod Macdonell, the Forum’s senior director of public information, explained that Canada is one of the most decentralized of the world’s approximate 28 federations, and as a result, there are a variety of federal and provincial laws that govern how journalists practise their profession.

For instance, provincial governments have some say over the way journalism is practised in Canada through libel laws, and some authority as well over the business side of some news media, such as newspapers. Press Councils, self-regulating media watchdogs, are also set up under provincial laws.

Mr. Macdonell said that this is such a powerful protection for journalists in Canada because Canadian courts can, and do strike down provincial and federal laws that hinder freedom of the press and freedom of expression.

Shawn Houlihan, the Forum’s director for Africa, told the students that Ethiopia’s federal system is not as radical as many of its detractors believe, and that looking at comparative systems and practices from the world’s other federal systems can help to develop a more balanced assessment and provide a useful basis for its future evolution.

He gave comparative examples between Ethiopia and other federations in how they each deal with issues like ethnic identities, secession, division of powers, political parties and democratization generally.

It has been just 15 years since Ethiopia, a young federation, adopted its constitution and Mr. Houlihan said the process of power-sharing between the two orders of government is still being worked out in some areas.

The journalists were also addressed by Fitsum Kassa, a new Canadian and former head of English broadcasting at Ethiopian Television (ETV).

Ms. Kassa told the journalists that although Ethiopia is a young democracy, there are many areas where inquiring journalists can carry out reporting and be of assistance to Ethiopians, such as by doing in-depth reporting on the environment and on increasing levels of air pollution that have come to plague the Ethiopian capital city since the economy began flourishing in the last five years.

The Forum staffers and Ms. Kassa spoke to the journalism students in a three-and-a-half hour presentation on Dec. 26.

They were the guests of the dean of the department, Dr. Gebremedhin Simon, who invited the Forum representatives to return and speak on other issues relating to Ethiopia and its federal system.

The Forum’s office in Ethiopia, which also serves as its African headquarters, is located on the campus of Addis Ababa University.